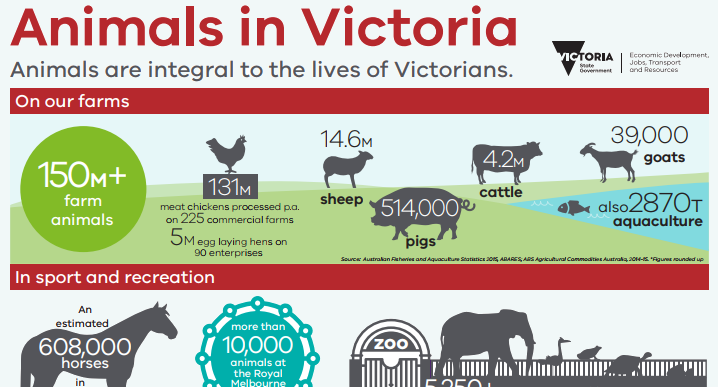 The final Animal Welfare Action Plan has been published by the Victorian Government. It is a disappointing document which contains no protections for animals and confirms their property status as production commodities.

Vegan Australia's submission to the inquiry last year called for alternative ways to obtain food and fibre which do not involve the unnecessary suffering and killing of farmed animals. Our submission noted that farmed animals suffer pain and their lives are extinguished to produce products that are not necessary for human wellbeing. All these products, including those for food and clothing, can be replaced by plant-based products.

Our submission was based on the science of animal sentience and the science of human nutrition and called for the phasing out of all animal use, in particular animal agriculture, in ten years.

The final plan does not address any of these concerns and is simply a justification for the continued use of animals by the animal industries, allowing horrendous suffering to occur on a routine basis. The Vegan Australia submission suggested that animal industries should have no input to the plan because their primary objective is to use animals as commodities. There should have been no place for those who profit from the exploitation of animals. However, it seems that the animal agriculture industries played a significant role in creating the final plan.

The Vegan Australia submission also called for community education to inform the public about the horrific realities of animal agriculture and to educate people how to live healthily on a plant based diet. An example given was honest labelling of animal products. The submission stated "Most people agree that causing unnecessary suffering and death of any sentient being is wrong and we should not participate in it if we can avoid it. We believe that given the right information about 1) the sentience of animals, 2) the unavoidable suffering of animals in agriculture and 3) the scientific evidence that humans have no need for animal food products, then there will be widespread public support for the complete phasing out of animal agriculture in Victoria."

The final plan refers several times to animal sentience and public education as well as "communication of information about sentience". This and the call to establish a dedicated public sector group called Animal Welfare Victoria are the only signs of a positive outcome for animals.

Vegan Australia is also concerned that the plan does not treat all animals equally, with a strong emphasis on pets and a blind spot regarding farmed animals, particularly animals raised in industrial farming systems.

Of the 11 photographs of animals in the plan, only four show farmed animals and none of these show how the majority of animals live in Victoria - confined in sheds, never to see the light of day.

As well as visually ignoring the plight of farmed animals, the words used in the plan are also biased. There are three mentions of the word "wildlife", eight of the word "pet", 13 of the word "dog" and yet there are only eight mentions of animals normally bred for food (chickens, sheep, pigs, cattle, cows) and which make up 95% of animals covered by the plan.

This plan does nothing for the animals and everything to continue the current suffering of animals. As suggested by Paul Mahony of Terrastendo, is this action plan designed for animals or business?