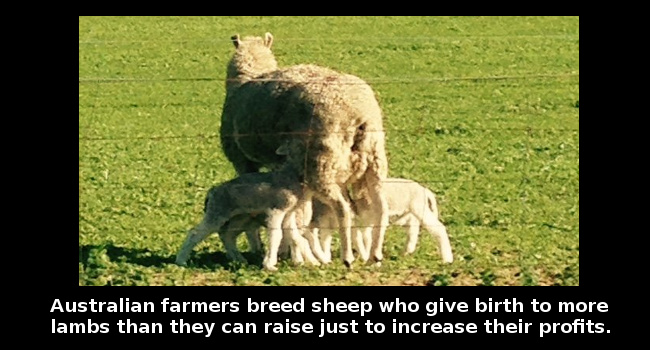 New research into genetic manipulation of sheep shows how little the animal agriculture industry values the lives of animals. According to an ABC Rural News report, by manipulating the genetics of sheep, they can increase the number of lambs born at one time, sometimes five or six lambs at a time, too many for the mother to raise. As South Australian farmer Simon Teate expressed it "We get more foetuses per hectare ... I only need to get a 17.5 kilogram carcass to get my 200kg of meat per hectare, which at $4.80 is $960 a hectare."

Using this new technique, death rates of the new born lambs are high. "There are a lot of bodies on the ground and they're not the sort of sheep for the fainthearted", Mr Teate said.

While farmers sometimes claim they "love" their animals, the truth is that it is really about the money. Margins are very slim and so farmers can only afford to "love" their animals just enough to keep them alive and make a profit from them. They only want to reduce the number of lamb deaths if it doesn't cost them too much money.

Professor Geoff Hinch, of the Sheep Co-operative Research Centre, said "You can get birth weights down around one kilogram, which is not viable outdoors, so really you've got to artificially rear lambs."

"We've left two lambs on, taken the others off and artificially reared them, but that's a price structure issue and it depends on the value of the lamb you're going to have at the other end.

Professor Hinch added "They're essentially highly stressed animals because they are being pushed to their limits." He is part of a team that is focussed on increasing productivity and profit margins. He said there were better ways to pocket more money from lamb production that matched the success others were getting with genetics.

Another member of the team, sheep farmer Colin Earle, said "The lamb industry is barely profitable. Even at these prices, there's about a 2 per cent return on investment. Unless we adopt [genetic manipulation], we may not have a lamb industry."

He added "The underlying weakness of the industry is that the genotypes we have available just do not produce enough lambs.

Mr Teate said he had been criticised by other farmers, but believed his profit margins were sustainable because of the genetic program. "A lot of the courses these days concentrate on the amount of foetuses that sheep are losing. The old saying goes 'where there's livestock, there's dead stock', so the more livestock you've got, the more dead stock you've got."

Let's face it, there is no way to humanely breed, raise and kill an animal who does not want to die. Go vegan.