My only regret is that I didn't go vegan sooner 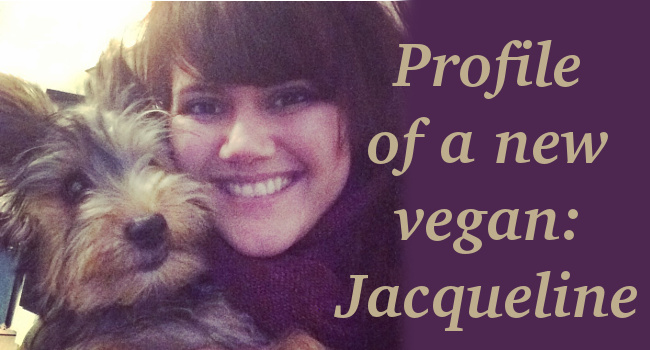 Profile of a new vegan: Jacqueline Ozorio loved the taste of meat. Then she met a vegan guy! Here is her vegan story.

I became vegan in the last week of October 2015. I was seeing a guy who was passionately vegan and he was an incredible source of information and motivation for me.

Before, I definitely knew deep down that eating animals was inherently wrong, but I just saw it as a way of life, a tradition, a luxury. I loved the taste. I loved lamb shanks; cheese, eggs, everything. It was all so normalized. From mum's home cooking to eating out with friends. Advertising was everywhere I looked, promising that organic, free range and grass fed was better for me and better for the animals.

In 2012, I tried a vegan challenge, but I quickly fell back into bad habits when the challenge ended. This time, though, I've not been tempted once. The difference is that this time, I'm doing it for ethical reasons. I watched a number of documentaries, including 'Cowspiracy' and 'Earthlings', which cemented what I already knew and suspected. It felt like being shocked awake from a cartoon daydream.

Now, I carefully research not only the food I eat, but also the clothes I wear and the products I use. It was overwhelming at first, but it's slowly becoming second nature.

Since becoming vegan, I can only report positive things: my digestion is working like a charm! I have better sleep and I wake up easier. I feel happier; more balanced, and as though a weight has lifted off my shoulders. Of course, I'm also losing weight at a very healthy, easy rate. I'm cooking more than ever and discovering such tasty food I wouldn't have even considered before. I never feel restricted because, these days, there is a substitute for basically anything! I've also had nothing but support from my close friends and family, and sometimes I feel like I've joined a secret society. I will never look back and, like so many of us, my only regret is that I didn't go vegan sooner.