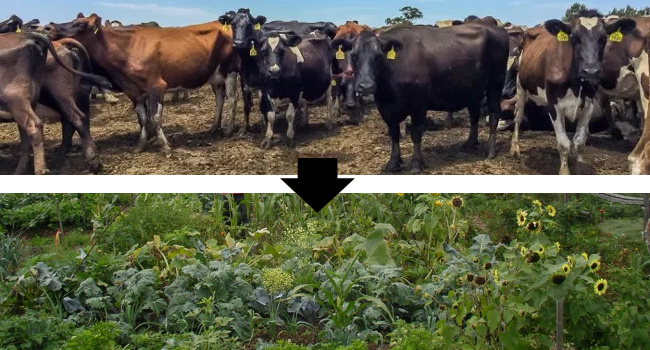 The movement to transition out of animal farming is gaining momentum in Australia and around the world, particularly in response to the worsening climate emergency and the significant contribution animal agriculture makes to many environmental issues.

One example in Australia comes from the Western Australian government, which will now pay farmers to capture carbon on their properties. Not only will this help draw down carbon from the atmosphere and sequester it in soil and vegetation, it will also provide native habitat for endangered species, increase biodiversity, reduce wind and water erosion and soil loss, reduce salinisation and improve water quality.

Even the mainstream media in Australia is reporting on the need for some farmers to leave their drought-prone properties. The farmers, nearly all of them animal farmers, are being encouraged to get out of farming, rather than just being bailed out of the current drought. Experts say they need exit packages to help them get off the land. This will allow the land to return to its natural state, thus increasing biodiversity. These farmers should be supported through this transition.

The Transfarmation Project is a US based organisation helping to connect the growing number of farmers wanting to switch from raising animals to growing plants to startups that are creating meat alternatives.

In the UK, the Vegan Society is running the Grow Green campaign to assist farmers in transitioning away from animal farming.

Also in the UK, the film 73 Cows documents the story of a beef farmer who breaks with tradition by going vegan and transitioning to plant-based farming.

In the US, there is an example of a chicken farmer who converted his farm to plant based. Sheds that used to house 45,000 chickens now grow hemp. Other examples include chicken farmers taking advantage of the new plant-based economy and converting their sheds to grow crops like mushrooms and hydroponic lettuce and dairy farmers moving into dairy alternatives while others are converting to hemp production. See this Forbes article.

In Ireland, the group Nature Rising is bringing together individuals, experts, and organisations concerned about the environment, health, and animal rights to put pressure on governments to stop subsidies that go to animal agriculture and to help farmers transition their land to either natural ecosystems or plant based agriculture.

In Europe, the Refarm'd organisation has formed to help farmers transition out of dairy by shifting into plant-based milk production. The organisation will assist farmers with retraining and provide support in the new ventures.

Vegan Australia supports all moves towards a world where animals are no longer used or exploited. Farm transitions will be an important part of this process.