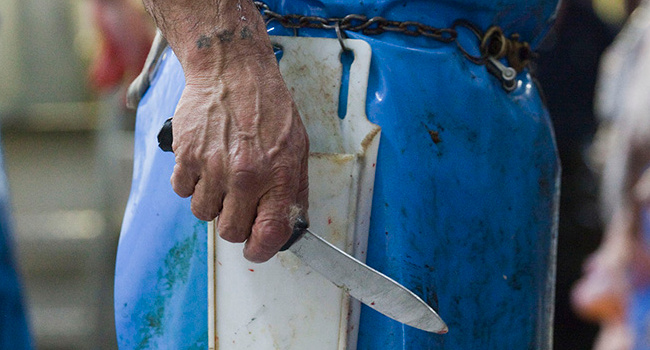 "The worst thing, worse than the physical danger, is the emotional toll. Pigs down on the kill floor have come up and nuzzled me like a puppy. Two minutes later I had to kill them - beat them to death with a pipe. I can't care."11
- Ed Van Winkle, hog-sticker at Morrell slaughterhouse plant, Sioux City, Iowa

There are 25,000 people employed in Australian's 300 abattoirs, slaughtering up to 10,000 animals per hour (that's three per second) in order to provide for the nation's appetite for about 600 million land animals per year1,2. Working at such a pace and in such an environment presents many physical risks, including repetitive strain injuries and lacerations of varying severity, making this a very dangerous job3. What is frequently disregarded, however, are the psychological risks posed to individuals and communities from engaging in long hours at an unquestionably brutal occupation.

Since Upton Sinclair's novel Jungle in 1906, a number of writers and researchers have posited or demonstrated correlations between slaughterhouse work and increased violence, with increased reports of offences and arrests within the vicinity of an abattoir4, including a startling 166% increase in rape arrests5. Flinders University's Dr Nik Taylor's study into attitudes of meat and livestock workers found an increased likelihood of aggression and violence towards other humans, even and especially amongst female employees5.

Much of the violence on the killing floors occurs within an industry-promoted realm of dissociation, where slaying becomes 'processing' and sentient beings become 'sides of beef'2, yet the deliberate cruelty uncovered by investigators such as Animal Liberation and Animals Australia - such as kicking, punching, stomping and stabbing - suggests more conscious sadism6,7. Retired PTSD expert, Sylvia Thompson, observes that alcohol abuse and domestic violence feature commonly in the lives of these workers, who assiduously clean both their environment and themselves, as though in an attempt to wash away their guilt.

In order to accommodate both cultural ritual and speed of processing, animals do not die painlessly. Animals slaughtered under halal and kosher rituals have their throats slit while fully conscious, and many animals who are meant to be rendered unconscious through stunning remain all too aware of being knifed, drowned and scalded. Lasting just one day as a slaughterhouse worker, Faith Edgecombe was deeply traumatised by her exposure to cows' screaming and struggling against such torture8. A longer-term employee, Virgil Butler became emotionally shut down, robot like and psychologically disturbed participating in the high-speed murder of chickens. Many of his coworkers used drugs to help escape such a reality9, while undercover investigator Timothy Pachirat's colleagues admitted to feeling "shaken and ashamed" about the cruel nature of their jobs10.

The aphorism that, were abattoir's to be made of glass walls, we'd all become vegan, speaks to the untold horrors that lurk in such places. While much of our society ignores the unimaginable scale of suffering for the non-human animals, it also fails to recognise the impact on the people employed in those creatures' torture and murder. An impact that does not remain within the slaughterhouse walls, but extends into the homes and communities of these damaged people, perpetuating a cycle of violence and trauma that we can ill afford to overlook.

Not only do animals suffer when they are treated as commodities, but so do humans, in many different ways. Please take the logical and compassionate next step and go vegan.

Vegan Australia recognises that a plant-based diet is not a universal panacea for mental illness. Mental illness is a complex, multi-faceted phenomenon and may require a number strategies depending on the individual experiencing mental health issues. If you or someone you know needs help you can contact BeyondBlue, Black Dog Institute or Lifeline.