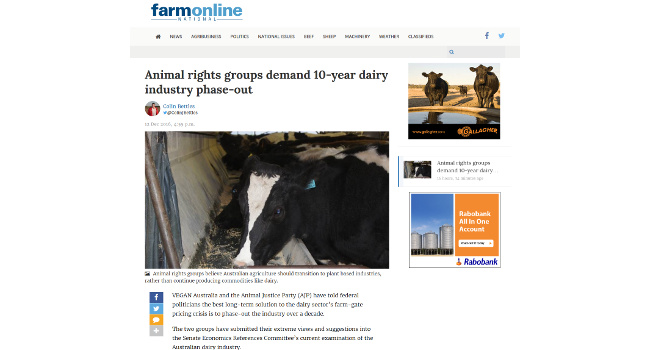 The Farm Online National news site gave a decent airing to both the Vegan Australia submission and to that of the Animal Justice Party.

The article stated that "Animal rights groups believe Australian agriculture should transition to plant based industries, rather than continue producing commodities like dairy."

Vegan Australia's submission said it was "very aware" agriculture was a fundamental part of society and it wanted to see the "continued prosperity" of farming and farmers.

But it said that goal could be achieved without the "use and exploitation of animals".

"Vegan Australia envisions a world where all animals live free from human use and ownership," the submission by Vegan Australia's Tim Westcott said.

"The long term solution to the dairy crisis is to phase out dairy.

"While the dairy industry may seem like a permanent fixture of the Australian landscape, it is only a matter of time before technology results in superior alternatives that are far more efficient."

The Vegan Australia submission also describes in some detail the many standard practices that cause a life of suffering and death for the cows and calves in the dairy industry. These practices would be perceived as abhorrent to the general population if they were widely known about. The Farm Online article ignored these points.