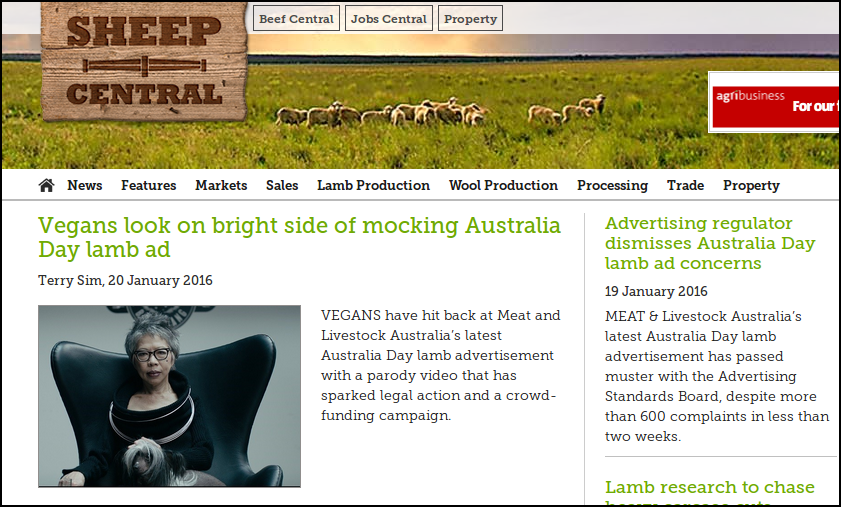 The meat and dairy industry has been giving veganism some good publicity recently. Today's example is the industry website sheepcentral.com where they give a platform for Aussie Farms founder Chris Delforce and Vegan Australia director Greg McFarlane to spread the vegan and animal rights message to the sheep industry.

The Sheep Central article is about the latest Australia Day lamb ad and the Aussie Farms parody of it, "Hilarious behind the scenes clip from the new Aus Day Lamb Ad". The article contains some excellent quotes.

Under the heading "Lamb ad issue is animal rights, not vegan offence", Mr Delforce says "My issue with the ad is the way that it makes light of what is an industry based on violence, based on killing. It is dangerous to think about how myself as a vegan or how other vegans might have been personally offended by this because it means we are forgetting about who the real victims are and those are the lambs, who want to live just as much as our pet dogs or cats."

Under the heading "Veganism getting wider exposure because of lamb ad", Mr McFarlane says "We probably wouldn't get invited to speak on talk-back radio if it wasn't for this advertisement, so the message goes out to a lot of people who haven't heard about the rights of animals and veganism. In this case, we make the best of it and use it as a platform to expose the cruelty that goes on in animal farming." Discussing footage of farmed animal suffering, he says "Even the stuff you get from the farming industry itself, like branding and ear tagging and castration as standard practices, is pretty horrific, when it is completely unnecessary and no-one needs to eat any of those animal products to thrive and have a happy, healthy life." Summing up: "We don't really want anyone to consume animal products or advertise those products. We feel it is violence against the animals and it is obscene."

Please add your comment to the Sheep Central article "Vegans look on bright side of mocking Australia Day lamb ad".

If you would like to meet some beautiful sheep and lambs in person, visit your local farmed animal sanctuary. If you are in Brisbane, you can meet some of the animals who have been rescued by Farm Animal Rescue at their Lambtopia Open Day on 24 January 2016. The Open Day is dedicated to the sanctuary sheep and lambs, and all of their cousins who won't live to see Australia Day. 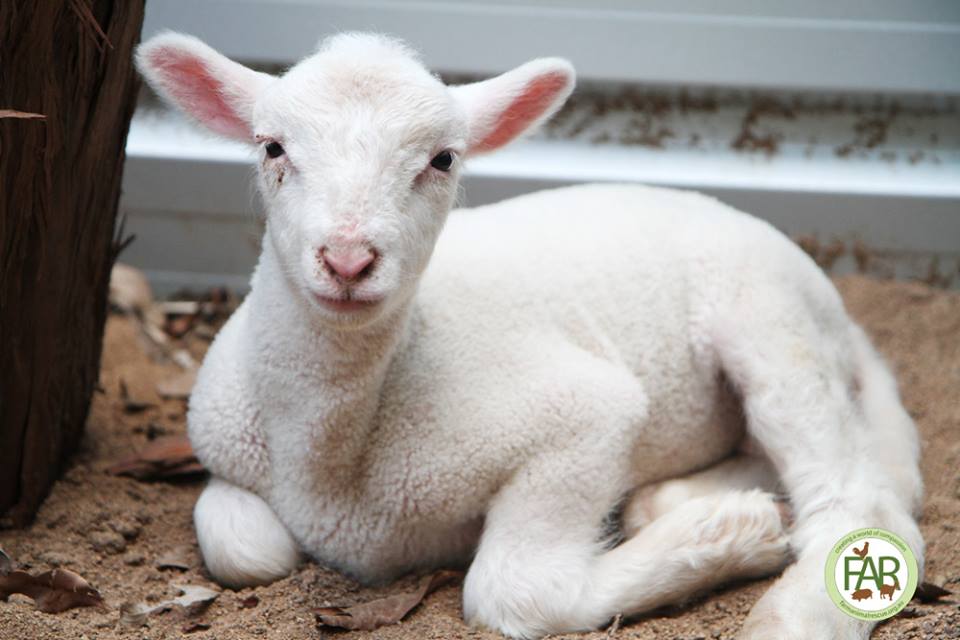