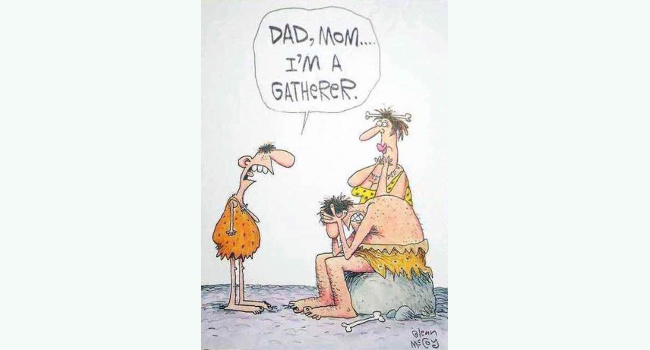 Why are most Australian vegans women? In this article, Chris McMullen looks at why the Aussie male may be so resistant to veganism.

Where are the vegan men?

I'm a fairly typical Aussie bloke. I'm 30 years old, I like to hit the gym, I work on the railways and I love a cold beer or ten. I'm also vegan, which means I don't use animals or their products wherever practicable. You might think vegan men would be scarce compared to women, and you'd be correct. In fact, one survey found that women made up a whopping 79% of the vegan community. So why is veganism a lifestyle that women are more likely to embrace, and what compels men to turn up their noses?

In 2010 I was invited to dinner with friends at a vegetarian restaurant. At that time, vegetarianism was a concept so foreign to me that it was practically inconceivable. I spent some time deciding whether or not to accept the invitation. I preferred my food to be meaty, manly and fulfilling; what a waste of an evening to eat nothing but vegetables. I tried to entice my comrades to a non-vegetarian restaurant around the corner but the majority of the group insisted on the meat-free cuisine. Once it was clear that I wasn't going to change their minds I accepted their offer and vowed to quietly drown my objections with alcohol. After a few drinks I realised the vegetarian food actually wasn't all that bad. In fact, it was delicious, so much so that I was left puzzled by my initial objection to dining there.

I soon realised I was influenced by gender norms and their associated pressures. Society maintains certain beliefs and behaviours with regards to gender, and these distinctions can permeate all aspects of life.

We're even inclined to see certain foods as manly and others as not-so-manly. To see this in action, simply offer a vegie sausage to any typical BBQ-loving bloke and watch him recoil with horror. You're likely to notice a less-pronounced effect in women, in fact, studies show that social pressure compels women to actually downplay and misrepresent the amount of meat they eat.

One consequence of gender norms is that many men feel compelled to hide some emotions and shun certain altruistic behaviours that might be considered feminine, such as empathy and compassion - and herein lies the roots of their resistance to veganism: it's a lifestyle that undermines their sense of masculinity.

Consider the pressure a man might face should he embrace behaviour considered feminine. His behaviour will be incompatible with society's idea of masculinity, this will undermine his identity and social status, he will thus feel pressure to uphold masculine qualities and reject those deemed feminine, or risk feeling emasculated.

A frequently-shared picture on social media declares the best way to a man's heart is through his stomach - unless, of course, he happens to be vegan, in which case his vagina is the preferred approach.

I'm often advised not to read too far into things - usually by well-meaning loved ones who find my disjointed ramblings tedious - nevertheless I occasionally find it necessary to insist upon some degree of scrutiny. Such is the case here where a dull platitude has been rehashed with an ostensibly sexist punchline. The take home points seems to be:

I'm sure there is more profundity concealed within the depths of the joke, however, my four bullet points will suffice for now because that is all we need to appreciate how entrenched gender norms are. It also brings me to my next gripe.

When some men feel their masculinity is in need of validation they resort to dismissive, and often sexist, jokes. Psychological projection theory suggests such behavior is often a defence mechanism, whereby one condemns in others, one's own unconscious fears and insecurities. Someone afraid of being thought unmanly, for example, might be inclined to ridicule others for their unmanliness.

Yes, I'm talking about you, Mr Manly Man. You like to imagine yourself as strong and confident but it's people like you who are the most obviously insecure. Hence your apparent concern that someone might doubt your masculinity - to which your first defence is offence, so you ridicule those whom you deem wimpy or "girly", in doing so you seek to demonstrate that you are neither of those things.

Furthermore you mask your ridicule with humour, such prudence provides exculpatory retreat. Should someone take offence you need only insist they "lighten up", this disarms your target while you direct the attention away from your own behaviour. This is schoolyard bullying 101.

Veganism is for Men Too

Social norms often dictate that veganism is incompatible with masculinity. To see why this belief is untrue, let's look at some stereotypical masculine characteristics. An article shared on the blog, Masculine Development, attempts to define masculinity on a primal level, several words stand out: protect, courage, honour, respect.

If we had a complete list of words that typically embody masculinity, the four above, while by no means exhaustive, would surely be in the mix somewhere. There are sufficient unappealing words one might also encounter, such as stubborn, aggressive, dominant, violent etc., but if we are going to take our masculinity seriously, we should learn from the more endearing terms. Let's unpack those four words a little.

When one chooses to adopt a vegan lifestyle, one chooses to reject the idea that animals are our property - and, in doing so, one defends and protects the victims who are the most innocent, subordinate, forgotten, abused, and numerous, on the planet: animals who, every day face misery, confinement, suffering and slaughter. Deep down most of us really do care about the fate of animals but our ideals, stubbornness and pride hold us back. Admitting that we actually care about the plight of animals when society has told us not to, takes courage.

There is more courage to be found in standing for one's convictions than in staying quiet and going with the flow. Willed ignorance, selective compassion and quiet complicity have no purchase within the domain of courage. It takes courage to question our behaviour and to make the requisite changes in our lives. In a world of unthinking consumption, a vegan lifestyle is one of quiet dissent, wherein one is often burdened by some degree of social stigma. To be courageous is not to be without burden or insecurity, but rather to understand these obstacles and persist in spite of them.

What is honour? Among its several meanings, the most applicable here is in the context of integrity: knowing and doing what is morally right. The italicised emphasis on "doing" serves to highlight its significance within the statement. For if one knows what is morally right, but fails to act in a morally right way, then one acts neither morally nor honourably. Most people can discern between right and wrong, and most people will agree that causing unnecessary harm to animals is wrong, yet most of us tacitly support the needless harming of animals with our day-to-day choices.

"Respect" has several different definitions but I will focus here on a morally relevant sense of the word. To respect someone need not imply that we like, love or admire them, although it may often be the case. In a broader sense, respect can be understood as simply having due regard for someone. Such regard can encompass many morally relevant facets, such as someone's wellbeing, their rights and their beliefs.

Veganism is, at its core, a movement of respect. Many animals are sentient, they can experience wellbeing as well as the misery of its deprivation, they also have their own subjective interests and preferences (such as avoiding suffering). In a morally relevant sense, sentient animals are someone, and not something. With this in mind, we can respect animals by acknowledging their moral status and acting in a way that ensures we don't violate their most important interests.

Conclusion: Veganism, Compassion and Empathy are for Men Too

I've argued elsewhere that veganism is a logical and reasonable conclusion given the moral significance of animals and the generally accepted notion that causing needless harm is morally wrong. Reasonable arguments will sway some people, however, there are many who remain constrained by dogma. Many men, for example, will at times forgo logic when its conclusion seems at odds to masculine values. I hope we can break free from these impoverished masculine ideals.

We expect masculinity to be found in our quest for status and conformity, and what a mundane, uninspired expectation that is. Perhaps masculinity is not simply a quality but a measurement of our unrealised potential, the essence of which dwells not within us, but outward, in our duty to others; human and animal alike. Virtue exists only in those touched by our deeds, and thus, our potential is without limit. Such a vision of masculinity is imbued with strength and valour, for there is no gesture more noble or selfless than to act not for oneself, but for others.

Men, you are strong, even more so than you imagine. And collectively you are far more powerful than you might realise. Together we are a force that can burn the world to ashes overnight or help her soar to glory; we can fight injustice at every turn, or we can use our power to act unjustly; we can continue brutalising animals for no good reason, or we can be brave enough to care. Gentlemen, this your invitation to stand for justice. Are you man enough to go vegan?

"Manliness consists not in bluff, bravado or loneliness. It consists in daring to do the right thing and facing consequences whether it is in matters social, political or other. It consists in deeds not words." - Mahatma Gandhi