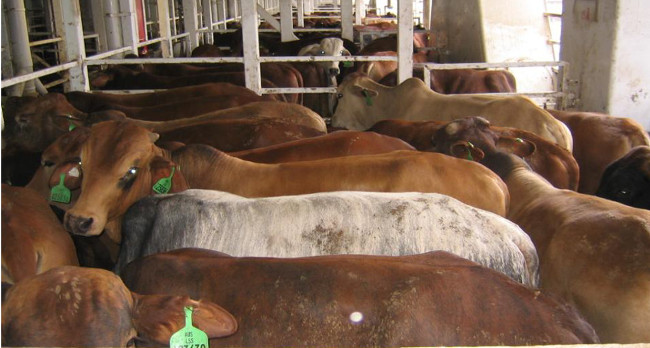 The following was released today by Animal Rights Advocates.

Stranded Animals Highlight the Problems of the Industry

Media release: WA's Animal Rights Advocates (ARA) is saddened by the news that 13,000 live sheep and cattle bound for Israel have been docked in Perth since Tuesday night. The MV Ocean Outback, owned by Wellard Live Exports, became stranded after it experienced engine problems. However, Katie Batty, Coordinator of ARA, said this is just one example of an industry that inherently harms animals.

"Australians are understandably distressed by the continuing images of animals dying aboard ships" Ms Batty stated, "Wellard Live Export say that animal welfare is their priority, but the reality is they are running a business in which living creatures are mere things for them to kill and profit from".

"But animal suffering in Australia isn't limited to live export", she pointed out. "Too often people focus only on live export which is just a tiny percentage of all the animals that suffer and die in Australian industries."

"For those concerned about these 13,000 stranded animals, we encourage them to also consider the suffering and death inherent of the half a billion animals killed in Australia every single year."

"To end the suffering of all animals we need to make these industries redundant by refusing to eat, wear or use any products from industries that harm animals. In simple terms, this means adopting a vegan lifestyle, which is easier than ever. ARA offers free vegan starter packs, mentors, recipes and other support to anyone who wants to act now to stop the slaughter of animals."

For more information animal rights and being vegan in Perth visit the Animal Rights Advocates website: www.ara.org.au and www.veganperth.org.au.