Join the Worldwide Climate Save Movement 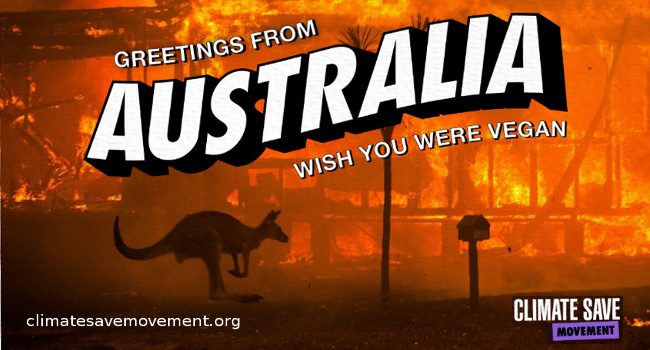 With ten groups in Australia, the Climate Save Movement is an international alliance of 189 groups in 49 countries aiming to reverse catastrophic climate change by ending animal agriculture, reforesting the Earth and phasing out fossil fuels.

Animal agriculture is a key source of greenhouse gas emissions, which can all be eliminated entirely. Animal agriculture is also the leading source of ocean dead zones, deforestation, mass species extinctions, and excessive water use. Veganism and reforestation are critical parts of climate actions and, along with eliminating fossil fuels, are our last hope against catastrophic tipping points for our climate.

According to the Climate Save Movement, "we believe 2020 and this coming decade is decisive in determining our prospects for planetary survival. By tackling animal agriculture we can reduce methane emissions, a potent greenhouse gas which has a short life span in the atmosphere. Its half life is 10 years compared to CO2 which is 100 years."

You can also join a vegan contingent at the upcoming Climate Crisis National Day of Action rallies around Australia on 22 February 2020. Sydney Climate Save is organising a vegan group for the Sydney rally, saying "We wish to spread a vegan message, as we are fed up with environmentalists ignoring the facts that animal agriculture is a leading cause of deforestation, greenhouse gas emissions, acidification of the ocean, pollutant of the soils and waterways."