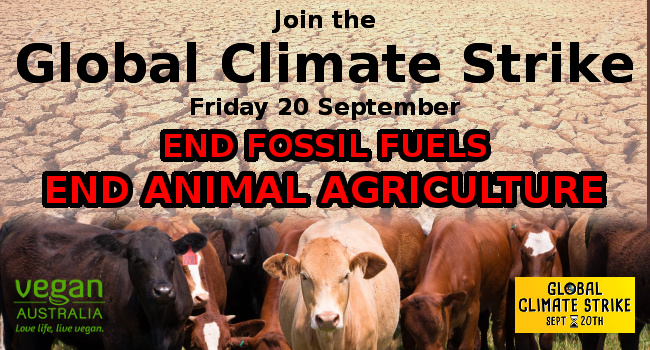 The world is in the middle of a climate emergency. We don't have much time to avoid runaway climate change and we need to take effective action now to protect our youth and future generations.

This Friday 20 September, a Global Climate Strike is being organised across Australia and around the world. The strike has been initiated by school students to demand serious action on the climate emergency. Vegan Australia supports the strike and urges you to support climate action by attending a strike near you. We have to stop the fossil fuel and animal agriculture industries from controlling the climate change debate.

Strike for climate justice! Join millions around the world making a stand to confront the climate crisis that is being ignored by our politicians. Find your closest strike here schoolstrike4climate.com/sept20

All are encouraged to attend the strike. The school student strikers are calling for adults to join as well. Greta Thunberg, the Swedish student who initiated the global strike movement, says that "to change everything, we need everyone. It is time for all of us to unleash mass resistance".

The devastating impact of climate change is being felt like never before in Australia, with record temperatures, prolonged drought, dying rivers, flash flooding, catastrophic bushfires, severe cyclones and heatwaves. In the Arctic and Antarctica, ice sheets are melting, fires are ravaging the Amazon and millions of plants and animals are in danger of becoming extinct.

Governments are not doing enough to fight climate change, so it is up to us to take action against government inaction.

Both fossil fuels and animal agriculture are major contributors to greenhouse gases. We need to address both issues to have any chance of avoiding climate catastrophe. By attending these strikes, we can help raise awareness of the terrible impact animal agriculture is having on our planet.

Head of Amnesty International, Kumi Naidoo said the climate emergency was the defining human rights issue for this generation of children. "Its consequences will shape their lives in almost every way imaginable. The failure of most governments to act in the face of overwhelming scientific evidence is arguably the biggest inter-generational human rights violation in history."

In Australia, more than 70 strikes are happening in capital cities and towns, with numbers expected to top the 150,000 who took part in strikes in March this year.

The global student climate strike movement is growing worldwide. It began in August 2018 when Swedish student Greta Thunberg stood outside Sweden's government every Friday. She held a sign that read: "School strike for climate". Photos of her went viral on social media. Students organized themselves and copied Ms Thunberg's actions. Greta is vegan because of ethical and environmental reasons.

Wide support for the strike

Dozens of trade unions are showing support, including the National Tertiary Education Union and the Maritime Union of Australia.

Bank Australia, Australian tech company Atlassian and hundreds of other businesses have formed the Not Business as Usual alliance and many are closing for the strike and urging their staff to attend. Ben & Jerry's are closing 35 shops across Australasia in support of the strike, stating that business as usual "is no longer a viable plan" in the face of a climate emergency.

The Australian Medical Association has joined other international medical groups in recognising climate change as a "health emergency".

At the time of writing, we know of vegan and animal rights contingents that will be part of the strike in these cities:

If there is not an organised contingent at the strike near you, just turn up and join the crowd, preferably with a placard or sign which raises awareness of the terrible impact animal agriculture is having on our planet. For ideas about placards, see our article about the 2015 Climate Marches.

We hope to see you on Friday!