I read the truth about baby calves and that was it 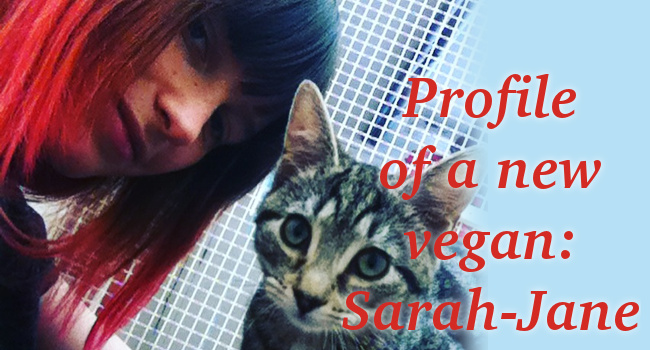 Profile of a new vegan: Sarah-Jane Tinkler became vegan after a one month vegan challenge. Here is her vegan story.

I have been a vegetarian since I was 11, I had always thought vegans were extreme loonies; cows aren't killed to get milk nor are hens to get eggs, or so I thought. I was in a bubble, unaware of the realities of the egg and dairy industries.

It wasn’t until 2011, when I was 27, that I met a vegan at an animal rescue. They told me to try going vegan for January 2012 and to look into the reality I had never even imagined. I remember eating cheese on New Year's Eve thinking about the challenge I had ahead. I told everyone it was for a month, it was a ‘challenge’, a ‘health kick’. I knew that it was so much more.

I've always been strong willed and knew that as soon as I committed to a month as a vegan I would stay. I knew there were horrors that had been kept secret, kept me vegetarian. I didn't need to watch ‘Cowspiracy’ or ‘Earthlings’, I don't believe I could have taken that. I did some research online, I read the truth about baby calves, especially male calves, and about cockerels and that was it. Enough was enough.

My passion for veganism 4 years later is as strong as ever. I educate people wherever and whenever I can. My husband and mother are now vegan and I will continue with vegan education until my last breath. The morals and beliefs veganism gives me helps me to live a non violent, compassionate life and gives me real purpose and focus.