I'd never expected to call myself vegan 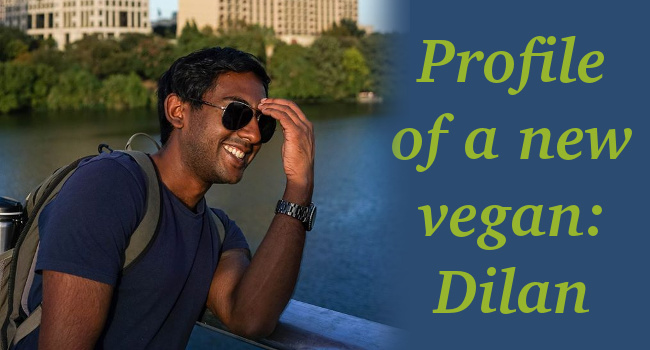 Profile of a new vegan: Dilan Fernando's first step to veganism was due to a slip of the finger. Here is his vegan story.

I'd never expected to call myself a vegan; until the day I became one.

It all started by accident, really.

I was 19. Trawling the Internet, my finger slipped and I found myself on the mysteriously titled "meat.org". A few seconds of slaughterhouse footage and a flurry of rapid heartbeats later, that was it. I was going vegetarian. It seemed the universe was feeling mirthful that night, because my Dad decided to take me out for Nando's chicken. You'd think his worst nightmare had come true when I mumbled that I'd like to order the veggie burger. It was a tense drive home. The family gathered around the dinner table; even my older brother, who lived overseas, was summoned (via skype) to quiz me on my lunacy. I stood my ground.

18 months later, I was interning with an economic development NGO in Fiji. During a trip out to a local community, a client of the organisation asked me to take a look at her business. Intrigued, I eagerly skirted her house, only to find that her business involved raising a lone pig.

He was fully grown by that stage. His pen was so small that he had no choice but to stand nearly upright on two legs, the other two reaching out of the enclosure at an awkward angle. I knew what his squeals begged for. Knew that those inky, wide eyes pleaded with me. I walked away.

Another 6 months down the track, I homestayed with a group of other Australian students in a village near Siem Reap, Cambodia. Our host lived with a puppy, who I named Pup; creative, I know. One morning, I heard a chorus of yelps through my open bedroom window. I scrambled out of bed to find Pup limping along, dazed while nursing a gash above his eye and a blood-sodden leg; He'd been attacked by the neighbour's dog. I expected someone to come and offer him assistance, at least a few minutes of attention. I was left wanting. No one seemed to care. Both the Khmer villagers and my Australian peers didn't seem to think Pup's condition warranted a second thought. If infected, those wounds would have killed him. Up bubbled the question: what made Pup's life less worthy of caring about? As Pup and I were still strangers at the time, I had no chance of cleaning his wounds without him lashing out. I did, however, offer him my company and comfort, at which point we developed a fast friendship. Thankfully Pup's wounds healed and he made it through, the little trooper.

By the time I returned to Melbourne, my mind brimmed with questions. Are the individuals in our agricultural systems really treated humanely? Why are nonhuman bodies treated as commodities? I found out the truth about the egg and dairy industries; made especially uncomfortable by my habit of scoffing down three eggs each day. But I still thought veganism was unreasonable. I wasn't some privileged hippie. "I'm not that extreme," I insisted. Surely there were ethical sources of eggs and dairy. I searched and searched, frantically hoping to preserve my old way of life. I found nothing.

I ended up at a Voiceless Animal Law lecture, where Phil Wollen hauntingly remarked "Only 100 billion people have ever lived. 7 billion are alive today. And we torture and kill 2 billion animals every week; if any other organism did this, a biologist would call it a virus." I don't cry in public, but that evening I came damn near close. The next morning as I reached for the eggs, my hand stopped mid-motion, completely out of my control.

That was 9 months ago. It was tough at first. I'd never expected to call myself a vegan; until the day I became one. My only vegan friend lived a sizeable drive away in Geelong. The status of nonhuman animals in human society is a heavy topic to broach with most people, so I largely kept it to myself, constrained by the false narrative of the "good vegan"; the idea that vegans should be silent about their ethics in order to minimise discomfort in the status quo.

Today, things are different. My mother and auntie have since gone vegan, with a handful of friends showing interest as well. I've found a community of like-minded folks - during my recent study abroad stint in the United States, I made lifelong, inspiring friends in the activist communities in North Carolina and New York City. Funnily enough, though in retrospect not all that surprising, my connection with the plight of nonhumans has made me far more compassionate toward humans as well. I realised that injustice against all animals; not just nonhumans, but also humans of certain races, sexes, genders, sexual orientations and so on, stems from the same mentality, a mindset of domination which insists that some deserve to live more than others. It's this mentality we need to break if we wish to create a freer, fairer world.

And I've learnt that we all can do that. We are each architects with the power to deconstruct and reconstruct the society surrounding us. If I ever momentarily forget that, all I need to do is remember what I saw in the eyes of that pig whose name I'll never know, and in the eyes of Pup, whose loving little carefree eyes remind me that the endgame, the world we create, will be more than worth the struggle.