I am vegan just as much for animals as for health 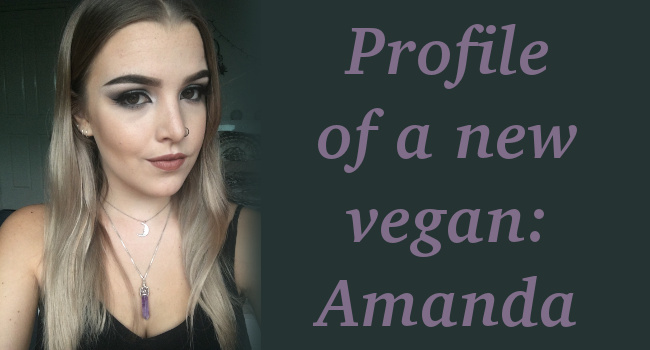 Profile of a new vegan: Amanda Stagoll's path to veganism was through her debilitating ill health. Here is her vegan story.

Initially my transition to veganism began as a journey to better my health. Having suffered a bad dose of Salmonella poisoning requiring hospitalisation at age 9 I found myself struggling to process the foods I used to. I would get debilitating stomach cramps weekly, causing me to miss more than half of my final year of school. Doubled over in pain, after 18 months of chasing doctors/specialist/appointments and blood test after blood test, ultrasounds and constant testing no one could give me an answer as to what was happening, instead they would tell me that I was most likely a sufferer of IBS.

After accepting my fate, I sunk into depression. This is when I reached out to a naturopath, which was the best decision I ever made! She checked my blood levels, listened to my symptoms and straight away said that IBS is not an answer or a real condition, she instead suggested I try a vegan diet as animal products are harder on the human digestive system.

I gradually transitioned over 6 months but I have now been fully vegan for over a month and would never ever look back! What started as a journey to better my health turned into a want to better the world as I learnt about the effect animal consumption is having on the planet as well as the cruelty involved. Now I am vegan just as much for the animals as I am for my health.

I have always been an animal lover but I never really looked into what was going on in the agricultural food industry, I had almost turned a blind eye to the exploitation, cruelty and outright mistreatment these creatures are exposed to everyday. I had believed they were treated humanely; how wrong I was.

My research into veganism soon exposed the industry for what it was and it physically sickened me. I started advocating for veganism from then onwards and after watching 'Cowspiracy' I was ready to spread the message to all that I can; I love to educate anyone about veganism and what is really happening to the animals to further spread the message. We need to stop animal product consumption, not just for the animals but for our planet as well.

My family, media and doctors constantly told me dairy and animal products are good for me and I should be eating more of them to help my stomach problems; It was these exact products that were ruining my life. Once I tried a vegan diet I have never looked back, nothing can compare to the intense feelings of great health, a correctly functioning digestive system and, most importantly, no more pain.

Family, for me, was a big issue when transitioning to a vegan diet. They are very defensive of their way of eating and ready to ridicule and tell you that veganism isn't a whole diet and that I will be lacking in nutrients (all these amazing plant foods are more nutrient dense than all the animal products in the world). Once it was established that I was definitely vegan and wouldn't be eating animal products they became more open minded toward reducing animal products consumption.

Having a group for vegans in my city on Facebook and following numerous vegan accounts, websites and blogs kept me motivated in my journey to veganism and maintained my optimism whenever I felt alone. These accounts are full of amazing vegan people who are supportive, helpful and the best community I have ever become a part of. A primary factor in keeping me motivated was myself, my want to live a pain free life, no more missing important dates or events due to stomach upsets or spending weeks in my bed writhing in pain. The more plant foods I ate and the less animal products the better I continued to feel. This constant empowering growth in health, energy and quality of life pushed me to stay vegan and I would never look back. I have even created my own vegan inspiration Instagram account to help people like me who are ready to help themselves and the environment but are not sure of how to start. (@amandaonplants on Instagram)

I have become an entirely new person since going vegan. My chronic stomach issues have gone and as a previous sufferer of anxiety and depression the positivity of veganism the groups and new friends I have made on my journey has filled my life with happiness and health. My health is at the best it has ever been, my blood tests are perfect, my weight is perfect, my body is lean and works like a machine, I have energy beyond measure, I have a constant want to push myself to be better and continue to educate others on the amazing benefits of a vegan diet, my skin is clear and glowing, my hair and nails are no longer brittle but rather soft and healthy, my digestive system works perfectly once again and I am all round feeling healthier than I ever have in my life. I feel as though I have become more aware of what happens in the world around me, I won't buy or support trades which harm animals in any way, I have educated myself on the agricultural industry and the effects it is having on the environment. I have become a much more healthy, happy and ethical human being, I feel more as one with the world and am ready to spread the word of veganism in a hope to heal our planet and it's inhabitants!