How I made one of the best decisions of my life 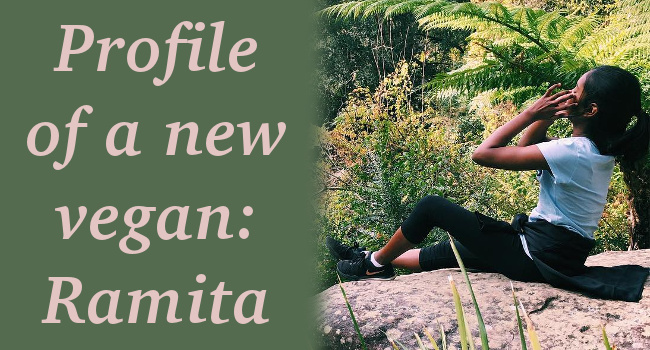 Profile of a new vegan: Ramita is an amazing young woman who cares about all animals and the planet. Here is her vegan story.

Hi, my name is Ramita and I'm 14 years old depending on when you're reading this. And here's the story of how I made one of the best decisions of my entire life.

Growing up, I always said that I loved animals, cared about the environment and took care of my health. If I saw an animal being abused or hurt in any way I would wince at their suffering, if I saw litter I would instantly pick it up and try my hardest to switch off appliances when not in use, set a timer for when I showered and always recycled. Most of this came from my parents who had raised me to do a lot for the planet and I'll get back to that later. And in terms of my health, I ate what society told me was "healthy" and good for me. Everything was good - or so it seemed.

I had heard of veganism sometime in my life and having a mum who was always in the kitchen, she did tell me what it was about but at the time I never gave it a second thought. Like, OK, people don't eat animal products, it's their choice. Sometime in 2016 I discovered a YouTuber called Freelee the Banana girl and watching her videos put me off the lifestyle a lot until one day I looked into what she was saying a bit more.

At this time, my little sister Sahana was educating me too and telling me shocking facts that I couldn't even believe like the fact that milk had pus cells and the immense cruelty faced by the animals we eat. It was only at this time did I realise why people chose to go vegan: it wasn't because they didn't like the taste of meat and dairy, it was because they cared about animal rights, the planet and what they were actually putting into their bodies.

After doing a bit more research I felt empowered to try veganism and give it a shot. But it wasn't gonna be easy. First of all, this was the girl who had eaten meat her whole life and loved it so much. Actually, I didn't even consider a meal a meal if it didn't have meat and I was having bacon and eggs for breakfast every day at this point. Yes, every day.

But then I realised if I was going to get tempted, I wasn't doing something right so I decided to watch a documentary called 'Earthlings' which I believe is very well-known among the vegan community and just the trailer made me sick and planted the vegan seed in my mind. The cruelty I saw in just the trailer made me mad, confused as to why we did this and motivated to go vegan.

At this time in my life, before watching 'Earthlings', I was pescatarian and then went vegetarian for two days before realising that I was clearly leaning towards going vegan and on January 20th 2017, my sister (who has also been on the journey with me) and I went vegan.

So I've been vegan for now 9 months! Not long after, my parents went vegan too and now our whole family is vegan, including our dog, who by the way is thriving on plant foods!

It's not easy being vegan and being young because you get judged a lot and it's hard to deal with close-minded people but I think it's important to remember that I was once like them and that all I can do is educate them.

At first veganism was just what I ate, but now it's my entire life because I choose to not pay for anything where any animal suffers, like in the cosmetics industry, also.

I feel healthier, happier and empowered knowing that every day I'm saving an animal's life. Yes, my parents get criticised for letting us go vegan, but I'm so grateful that they let my sister and I go vegan and decided to make the switch themselves too because I have so many people who come up to me and say that they'd love to go vegan but their parents don't let them and that makes me really upset.

I would never not be vegan now that I know the benefits and sharing the vegan message is so important to me and I try to every day through word of mouth and social media. No matter what people say, I will always be vegan and I won't stop fighting for innocent animals and our home until the last animal is free and global warming is non-existent.