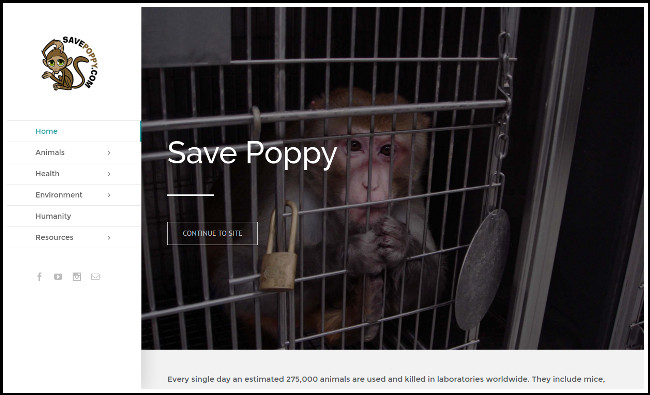 An exciting new Australian website aimed at helping the public understand veganism went live last week. The goal of the website, SavePoppy.com, is to inform people about the plight of animals and the impact eating animals has on animals, the environment, humanity and their own health. Beautifully laid out and informative, the website was conceived by Sydney vegan activist Andy Faulkner. Here we talk to Andy about the project.

Congratulations on the new website SavePoppy.com. When did it go live?

Why the name Save Poppy?

I was brainstorming with fellow vegans Veronica Rios and Mike McNally about names for this site, and Poppy sounded 'catchy' for a cute monkey and easy for people to remember. I chose a monkey as the site's mascot as most people love monkeys and are against them suffering. The public would see a monkey displayed on posters on power poles and take a keen interest. This would draw in a wide audience of animal lovers and those who are against animal cruelty. We also wanted a short name for signage etc. The SavePoppy.com domain name was available, and so I immediately rang Go Daddy in America and bought the name for 10 years - a cheap investment considering the lives of billion innocent beings are at stake. And so everything fell into place beautifully. Poppy was born.

It has a great design and a lot of information. How long did it take to create?

It took six months to create.

What was the motivation behind creating it?

When Earthlings was taken offline for free viewing, suddenly my enjoyable days and evenings of putting Earthlings posters on poles and chalking "Earthlings.com" on the pavement was no long useful. So Michael McNally and I thought long and hard about how to control our own website and what to include in it, so it couldn't be taken down, and was a resource vegans could use worldwide forever. Shaun Monson, the creator of Earthlings, made his film free viewing online for ten years, which was amazing. When it was taken offline, it was time for us to step up. This was crucial to the animals, the planet and humanity.

How does it differ from other vegan/animal rights websites?

The site differs to any other vegan website, as it links directly to animal activism in public. Vegans can contact me via Facebook or [email protected] and request SavePoppy.com posters to put on poles in public. The posters have SavePoppy.com tabs along the bottom for the public to rip off, which brings them directly to the site. In the pack I also include a giant car sticker for them to display on their vehicle. These are free. Postage is free also. Its a free service for animals, the planet and humanity. I expect this activism method will equate to more people becoming informed of the plight of animals and the impact eating animals has on the animals, the environment, humanity and their own health. And more vegans onboard equals more people for me to reach on vegan Facebook groups when I advertise SavePoppy to them and inform them how they can so easily get involved.

Is it targeted at just Australia or worldwide?

The site is targeted at both Australia and the world, with many American statistics and videos uploaded to the site also. The reason for this is due to the incredible success of Cowspiracy and the undeniable facts researched by the filmmakers. However, there are many videos from Australia, England and Canada also. Emily Moran Borwick has an amazing YouTube channel named Bite Size Vegan. Emily has a magical way of reaching non-vegans, so I included many of her videos. For this exact same reason I included three of our very own videos of local lad James Aspey.

How will it be used in the future?

With the internet fast becoming the new TV for the younger generations, it was vital to give vegans an extra tool when discussing issues online with non vegans. Vegans could no longer attach 'Earthlings' as a recommendation. So with this in mind, I created 14 different URLs on SavePoppy.com. This means vegans can direct a non vegan to a specific section of the site, depending on their interest. For example, SavePoppy.com/health could be sent to a family member with heart disease. The recipient is then directed straight to a selection of videos from the world's leading doctors on the topic of reversing and preventing heart disease. At the end of the section on the site there is an option to go forward to the next section or back to the previous section, hence keeping the viewer hooked on the site. The aim is that the viewer will view the 'Animals' section, which highlights the unimaginable pain and suffering animals endure at the hands of mankind. When they see the 'Animals' section, we have faith they will be vegan for the animals, which means no going back.

Is there anything else you would like to add?

May I add one point. In a section titled 'Activism', I am wanting Poppy the macaque monkey to inspire vegans. Becoming vegan is wonderful and is non participation in violence. However, if we see a man punching his dog in a park, and we walk past and say or do nothing, while not participating in any of the violence, now this is veganism. But we believe there is a better option. The best option is to intervene, to stop the violence. May activism be the moral baseline for veganism.