Fruit and Vegetable Consortium to improve health of Australians 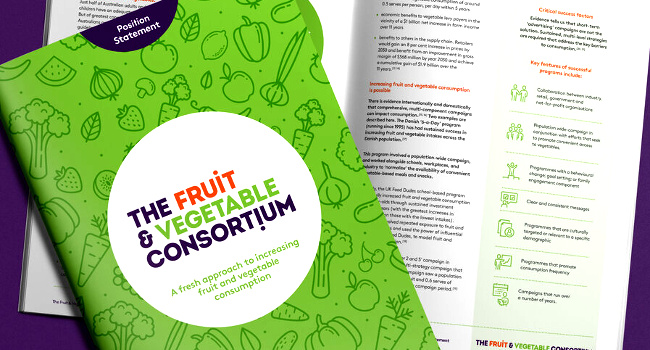 Vegan Australia has become a supporter of the Fruit and Vegetable Consortium, a new alliance formed to increase the alarmingly low rates of fruit and vegetable consumption by Australian children and adults.

The consortium states that "There is a well-established link between increased intake of fruit and vegetables and improved health outcomes. Diets rich in fruit and vegetables have been shown to protect against high blood pressure, obesity, heart disease, stroke, type 2 diabetes and some cancers."

A higher consumption of fruit and vegetables would not only improve people's lives, but would significantly reduce medical costs. The Consortium's Position Statement states that "If every Australian ate an additional half a cup of vegetables per day, government health expenditure would reduce by an estimated $100 million per year ($60.7 million to the Commonwealth Government and $39.2 million to states and territories)."

Founding members of the consortium include key organisations in government, research, health and vegetable farmer bodies.

The consortium will also address systemic barriers to healthy consumption, such as accessibility, availability, price, convenience and food literacy. It will particularly look at increasing vegetable consumption for communities with the lowest intakes.

While the consortium is not a vegan organisation, their work will help lower some of the barriers to going vegan, by publicising the health benefits of eating plant foods. Also, an increase in fruit and vegetable consumption may also lead to a decrease in the consumption of animal products.