From dairy farmer to vegan overnight 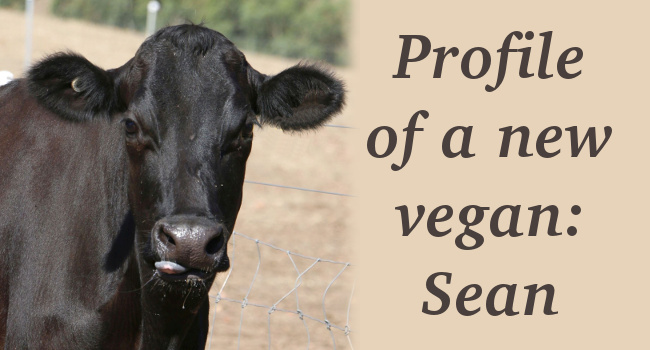 Profile of a new vegan: After loading 40 dairy cow "culls" onto a road train headed for the abattoir, Sean became vegan. Here is his story.

After finishing school I moved from my native Germany to Ireland and started as a trainee dairy farmer. I loved every minute, learning skills in animal husbandry, cropping, operating large machinery and being outdoors. The farm I worked on incorporated organic dairying principles with a mixed stock approach which included pigs and sheep to graze and fertilise the soil. On a typical day I would be up early in the morning milking cows followed by feeding calves and pigs and depending on the season do some tractor and fencing work or move stock in the afternoon. We also processed all of our own produce. From fresh milk we made yoghurt and cream cheese, the lambs got turned into lamb chops, the pigs into little sausages and the bull calves into steak and mince.

There were times when the going got tough, for example castrating bulls with a giant pair of forceps, holding down 4-week-old calves as their budding horns got burned out of their skulls with a hot iron and separating newborn calves from their mothers. But those occasions were quickly forgotten as this was the "cycle of life"; it just had to be done.

After dairy farming I went to university to study science and after graduating worked in environmental management. During this time I continued to consume meat, eggs and dairy. I bought free range eggs and chicken, grass fed beef and sow stall free pork. I made ethical choices about what I consumed, or so I thought. Then a new job came along. The offer: dairy farming for one of Australia's largest operators, 1500 dairy cows, good pay and career progression and a chance to migrate down under. I jumped at it and a week later I started, but nothing quite prepared me for what I let myself in for.

1200 cows milked three times per day resulting in 30,000 litres of milk every 24 hours. The entire operation was immense; 40,000 litres of fresh bore water was needed every day just to wash the manure off the milking parlour and yards.

On my first day I joined a crew of workers de-horning 150 young heifers using nothing but a sharp knife. It was hard going; arterial blood pulsated out of the gaping holes left behind after the horn had come off. The animals desperately tried to escape my hold as I carefully placed the ratchet over their horn. CRUNCH. The sound as the curved blade carved out the root of the horn. I nearly quit that day but I hung in there.

I clearly remember one of the first days of calving season. Every day calves born within the last 24 hours were collected from the field, placed in a small trailer and driven, not to the calf pen, but to the dairy. The mother would follow, profusely mooing, some would get aggressive and attack anyone nearby, others would run away startled and scared. Only when mother and calf had arrived at the dairy would they be separated, this was done to exploit the cow's instinct of always returning to the location where she saw her calf for the last time. This way she would always return to the dairy for milking and not to the field where she gave birth. The screams of mothers calling out for their calves would last up to three days before they gave up. Some mothers were so desperate that they would break through a series of electric fences and gates to reach the calving pen, often we would find mothers in the morning sleeping outside near their stolen baby.

Then there was breeding; the core component of every dairy farm large or small is getting cows pregnant. A fertile non-pregnant dairy cow normally comes into heat once every 3 weeks. To standardise this cycle large dairy farms employ so-called fixed artificial insemination programs. This means all cows get injected with artificial hormones to get them ready for breeding at the same time.

As I had studied bioscience at uni I found the breeding side of things terribly interesting, so I signed up to get qualified as an Artificial Insemination technician. I attended a three day course which consisted of a short theory segment followed by two days of practise. Artificial inseminations work by inserting the left arm deep into the cow's rectum to feel through the rectal lining for the cow's cervix. The next step is to insert a long sperm gun into the cow's vulva and carefully feed the tip of the gun through the cervix and into the uterus where a small sperm sample is ejected. After repeated practising of this process on a group of restrained cows over two days, the animals were bleeding from the rectum and were in considerable discomfort. We were told this was fine as the animals were culls and due for slaughter the next day.

But then came the day that made me become vegan overnight. I arrived for my shift like any other day; a road train was booked for that afternoon to take a mob of 40 "culls" to the abattoir. When dairy cows stop producing milk, mainly as a result of failing to get pregnant, they get culled for beef. The monthly culls for our operation were in the order of 30-40 cows per month. I had loaded numerous trucks with culls before so this was an easy and quick job.

By the time the truck arrived the cows had been waiting all afternoon in a yard and it was getting dark. They were calm and quiet as I approached them, a few were laying on the ground chewing their cud, others were standing and waiting. As I led each cow up the ramp and into the truck it dawned on me that tonight the social connections they had formed within their herd would be broken and that tonight their life would meet a violent death. As I shut the truck door I took one last look at them, forty pairs of dark eyes looked back at me and I saw the fear in their eyes, it was as if they knew their fate. In this short moment I thought, you are killing 40 sentient, social, caring and intelligent beings. For the first time in my life I realised that everything I once considered the norm, was actually built on sand. It was some type of awareness I had never felt before. Suddenly I realised that all living things have a desire to stay alive and be free from fear and harm.

A few months later I quit the dairy industry for good, but not before one last act of kindness. During my time on the farm I had made a friend. She was a small jersey cow; quietly tempered, I even previously helped her deliver a calf before taking it from her. I was going to make it up to her. One day I saw that she was on the cull list as her milk yield had dropped below 5 litres per day. I seized the moment; paid the price the abattoir had offered and bought her from the farm. I took her out of the herd, removed her collar and ear tag; she was free at last. A few weeks later a truck arrived with a horse float; it was her ticket to a new life. Christabelle can now live in peace with other rescued animals at Happy Hooves Farm Sanctuary near Perth, Western Australia.

I have now been vegan for over one year. During this time my partner and I have helped a number of people become vegan and we hope to continue educating people about the realities of animal farming.