Everything I had been told was a lie 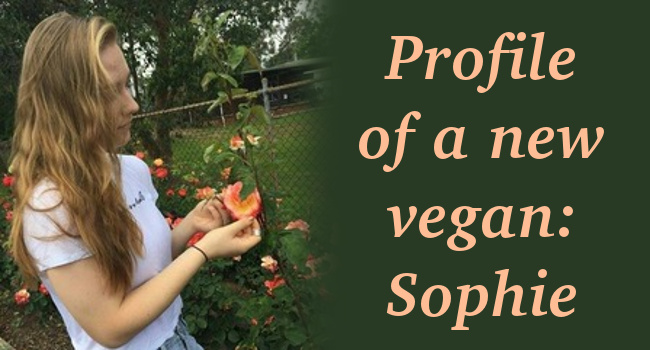 Profile of a new vegan: Sophie is a young teenager who was shocked to find out that everything she had been told about 'humane slaughter' and 'free-range' was a lie. Here she tells her vegan story, including her struggles to live within a meat-dominant family and culture.

"You eat what you get and you don't get upset."

How many times have you heard this growing up? For me, this happened when I decided I told my parents I wanted to go vegan.

At first, I was met by smirks almost as if I told them I was going to fly to the moon tomorrow night. The initial disbelief of my family when I told them made me want to change my mind about veganism. But I wouldn't be here telling my story if I let my doubts take over.

My mother was born in Slovenia, so the Central European culture played an important part of my identity and what I ate on a daily basis. Meals were usually meat centred, as it is a Balkans country; kielbasa, jota, schnitzel, kranski just to name a few.

It was difficult for me to change this huge part of who I was. But, eventually, I did find vegan recipes so I could recreate my favourite cultural dishes and have had many successful attempts at recreating the perfect potica, which my Nana and Dedeck haven't noticed is vegan yet!

Now my journey began in 2017 when my best friend went vegan, whilst I was at the time only vegetarian. I had deep respect for her, so I knew this must be important to her but it bewildered me. Did we all ride in kombi vans and hug trees? I heard the term being thrown around a couple of times, so I decided to research what 'veganism' really was all about. I heard many vegan Youtubers recommend documentaries such as Earthlings and Okja and that's when my life changed.

Soon after watching those, I fell into what I call the 'vegan blackhole'. Everything I had been told about 'humane slaughter' and 'free-range' animal products was all a lie. As I dived in more documentaries to news articles, I couldn't believe my eyes. Animals were being used as parts to fuel human gluttony whilst the answer for compassionate alternatives lay in front of us the entire time! But it has become so ingrained in our society and everyday eating that most of us do not make the connection on our plates to the once living animal. Believe me, when I found out how animals were treated in the food industry, a tiny part of me wished I never knew so I could live in blissful ignorance because now a huge responsibility was on me to speak up. Alas, I couldn't stand by and eat a pig while I petted a dog at family BBQ's, it was beyond cruel! I felt like it was my choice now to change my ways and had power, as a consumer to pick alternatives that did not forcibly impregnate or cause unnecessary violence to an innocent sentient being.

So far now, I have been vegan officially for over a year and I have no desire to turn back to my old ways. Sure I have made mistakes, plenty of them believe me. From accidentally eating foods with 'whey' in them and even buying leather school shoes, it became an ethical nightmare! At the time, it nearly seemed impossible that I could ever navigate a cruelty-free lifestyle. Even when I went travelling in Europe in 2017, I was sometimes obliged to eat meat in certain countries, as not to be offensive. But there is no way I would go back. I now use these mishaps as learning progress. We are only human after all so I've learnt not to beat myself up on it.

But now it's become second nature and a new part of my identity. I know what I'm doing is right and am still able to enjoy my teenage years. I check makeup labels, bring a platter to parties, eat out with my friends but most of all, I realised I could still be a teenager and enjoy all the things with that, just cruelty-free and vegan of course. My favourite makeup brands I recommend are Nyx, Australis and Nude by Nature whilst I also highly recommend Soul Burger and Lord of the Fries for your vegan junk food fix.

We all make mistakes, but working towards a common goal of a compassionate Earth is better than anything I could have ever dreamed of. Anyone at any age can live a cruelty-free lifestyle and make a difference in the lives and welfare of others. To me, it's just one vegan hamburger at a time.