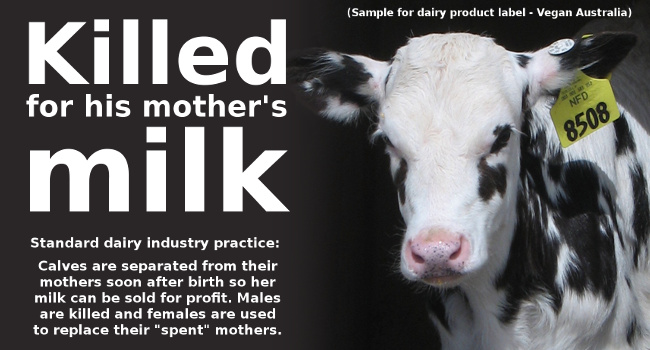 A dairy industry lobby group, Dairy Connect, has recently called for a ban on the use of the word "milk" for soy milk, rice milk, almond milk, etc. They want "truth in labelling".

This echoes a move by the dairy industry in the USA to stop plant based products from being labelled as milk, following a 54% growth in sales of plant milks during the past five years. Dairy Connect says that plant milks have taken market share away from cow's milk in Australia as well. The dairy industry is concerned that more and more people are choosing products that are not the end result of the suffering and death of dairy cows and calves.

Dairy Connect says "food labels should clearly and accurately identify the true nature of the food to the consumer". Vegan Australia strongly agrees with this position and calls for real honesty in labelling. All labels on animal products, including those on dairy products, should explicitly describe the suffering the animals endured to create the products.

Vegan Australia proposed this in its submission to a recent Senate inquiry into the Australian dairy industry:

While Vegan Australia believes that the dairy industry should ultimately be phased out in Australia, in the intervening period the public has both a right and a responsibility to understand the realities of production of dairy products they consume. To this end, mandatory labelling of all dairy products sold in Australia should be introduced to educate the public on the effect of the dairy industry on animals. Such a label should include the significant relevant types of suffering endured by the animals, to allow consumers to make an informed choice.

An example of information that should be provided is shown in the image below. The label describes the suffering endured by a typical dairy cow and her calves. 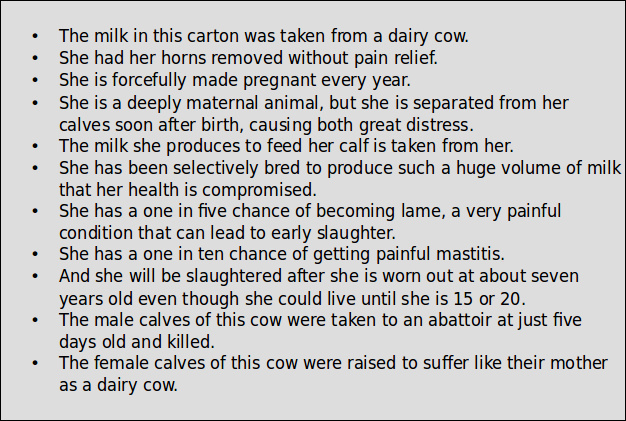 Research has shown that when people are made aware of how meat and other animal products are produced, they are more likely to make more ethical choices. The research gives support to the idea that animal products should be labelled honestly, showing the animals as individuals and the suffering they endure. One study showed that people were less willing to buy meat if the label showed the living animals used in its production. This suggests that cow's milk labels should display images of the bobby calves killed in the making of the milk.

The current situation, where most labels contain no information about the treatment of the animals used in the production process, is deceptive and likely to mislead or confuse potential buyers. The proposed animal suffering descriptions should include detailed listings, as shown above.

A possible model may be the anti-smoking labels on cigarette packets, but instead of educating people about the dangers of smoking to their own health, these would educate people about the suffering and death caused to animals in producing the products. An example from the cigarette industry is: 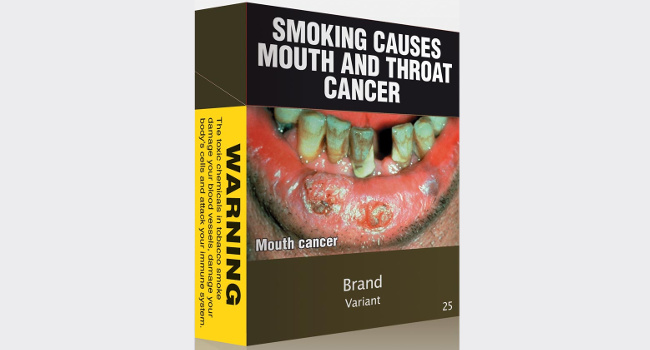 For effective labelling of animal products, the labels could consist of a short bold message and a graphic image on the front of the packet, with a longer text description on the back of the packet. Here is a sample: 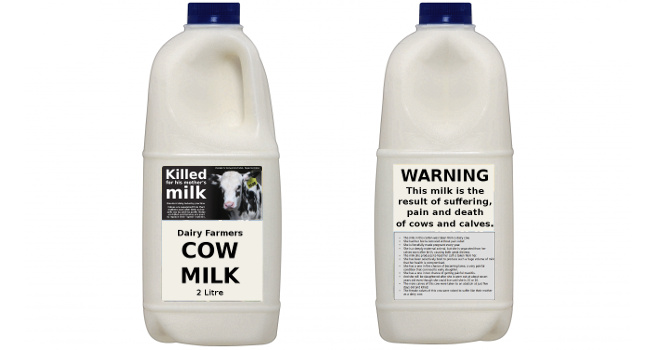 Similar label descriptions can be used for organic, "free range" and conventional milk, as calves are killed so we can drink their mothers' milk in each of these systems.

Consumers want to gain as much information about the products they are buying as possible. One of the aims of food labelling laws is to support consumer decisions about buying food products, including production processes. Misleading labels can result in consumers making choices that do not reflect their preferences.

Adding honest labels to animal products should level the playing field somewhat. We are incessantly bombarded with dishonest marketing to purchase animal products and that should be countered to allow consumers to make informed rational choices.

Vegan Australia urges Dairy Connect to honour its call that "food labels should clearly and accurately identify the true nature of the food to the consumer" and apply this same reasoning to its own products of suffering and early death.