Coronavirus and other diseases caused by animal farming and hunting 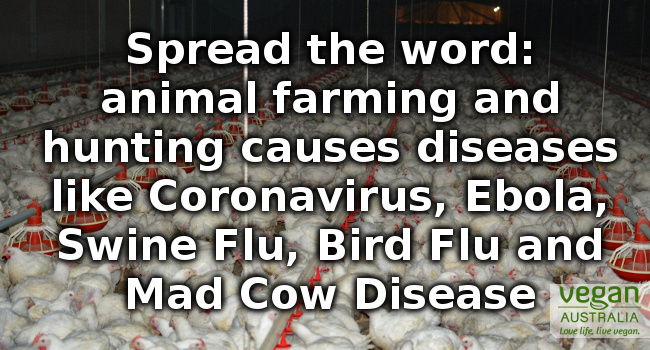 We are currently facing a health crisis not seen for over a century and we urge everyone to take all precautions given by experts to help slow the spread of this disease. However, we should also look at the underlying causes to try to prevent any future epidemics.

The current coronavirus pandemic has been predicted for many years. Scientists have been stressing the link between human and animal health for decades.

Most human infections originally came from an animal source. According to the US Centers for Disease Control and Prevention (CDC), 75 percent of new or emerging infectious diseases in people come from animals. Even diseases such as measles, smallpox and tuberculosis originated from the domestication of herd animals. See Animal origins of human infectious disease, by R A Weiss, University College London. Scientists have been able to determine this by genetic sequencing of the viruses. Even the common cold may have come from domesticated cattle. These diseases are known as zoonotic diseases, meaning they are transmitted from animals to people, in most cases through animal agriculture or hunting.

Other zoonotic diseases include Coronavirus, Ebola, MERS, Swine Flu, SARS, Bird Flu, Mad Cow Disease, AIDS and Spanish Flu. These diseases started from human use and exploitation of animals but are now mainly spread from human to human.

Diseases originating from farming, hunting or eating animals have infected billions of people and killed many millions. In addition, the economic cost has been very high. In the last few decades, diseases from animals have cost hundreds of billions of dollars.

The human cost has been even greater for non-European people. Shockingly, livestock-derived zoonotic diseases contributed to the loss of as much as 90% of the native American population. The Australian aboriginal population was similarly impacted by animal-derived diseases brought by European settlers.

While the current pandemic has its source in China, it is important to note that over the last few decades, diseases have originated from across the globe: USA, Mexico, United Kingdom, Africa and the Middle East.

As David Benatar says in The Chickens Come Home to Roost, "If humans did not eat wet market animals, there would be fewer of them (because fewer would be bred), the animals would not suffer from being housed in close quarters, and they would not be slaughtered. Consequently, the risk of zoonoses would be greatly diminished. In the case of variant Creutzfeldt-Jakob disease, humans would not have become infected had some humans not killed or eaten cows infected with BSE. Moreover, BSE would not spread among cattle if humans did not process offal, including neural matter from BSE-infected cattle, to produce feed for other cattle, a practice prompted by the volume of cattle humans eat. If the plausible hypothesis that HIV resulted from simian immunodeficiency virus is indeed true, then the most likely causal route of transmission was through infected simian blood during the butchering of these animals. The butchering itself was most likely for the purposes of providing nonhuman primate meat ("bushmeat") for human consumption, a practice that continues today."

Unfortunately it may too late to stop the current coronavirus pandemic, but we can help prevent the future spread of new zoonotic diseases by phasing out the production and consumption of animal products. Governments should recognise the underlying cause of these diseases and take urgent action. We now know that rapid change is possible: the governments of the world have reacted within weeks and months of the first case of coronavirus. This proves that governments can act quickly and strongly and they should put the same effort into phasing out animal agriculture and educating the public about alternatives to animal products.

Individuals can help too, by going vegan and letting everyone know that animal use and exploitation is the cause of so much disease. These diseases would not exist if the world was vegan.