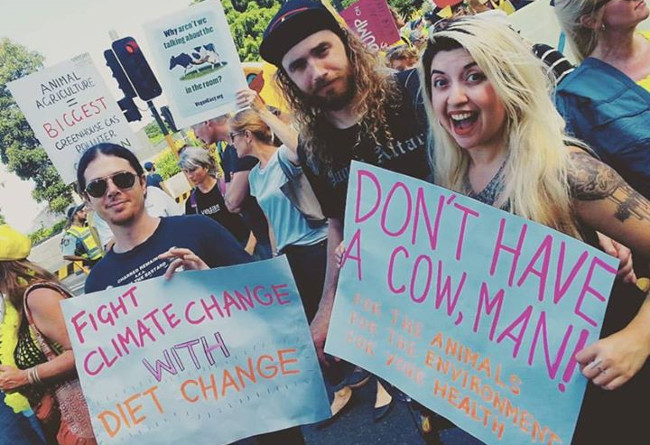 "Animal agriculture is a major cause of global warming." This was the message made by hundreds of concerned Australians at the recent People's Climate Marches across the country. While most environmental groups fail to acknowledge the catastrophic effect meat, dairy and egg production has on global warming and the subject was ignored by the speakers at the rallies, the general public was willing to learn the facts and make the needed changes.

The marches in Australia were part of a global weekend calling for action on climate change ahead of UN climate talks in Paris which started on Monday. The main demand at the rallies was an end to fossil fuels and a transition to renewable energy. Unfortunately this will not be enough to overcome climate change: the problem of animal agriculture must also be addressed.

The message about animal agriculture was well received by others at the marches, with many "reaching over others through the crowd to get a copy of the [vegan] booklets" and others thanking those holding educational banners and giving out material "for being there and saying they agreed with everything we were saying" commented Kristin Dresden, who attended in Melbourne. "Several even expressed immense frustration that the speeches talked only of coal over and over and not one person addressed the leading cause of climate change."

Many placards asked people to "watch Cowspiracy", the documentary exposing the negligence of environmental organisations for ignoring the impact of animal agriculture on global warming.

As one placard in the Canberra march said "Animal agriculture is the leading cause of global warming, water usage, ocean dead zones, deforestation, species extinction, suffering and death".

After the march in Canberra, the AnimalACTivism Collective held a picnic for those who came to speak up for the animals and the environment, with stalls giving out information and selling vegan food. There were a lot of "good conversations and educating" said Jyoti Dambiec. "Our task is to help people connect the dots".

In Sydney, a "guerrilla style vegan activist" group stood near the start of the march, holding up educational placards about animal agriculture, veganism and Cowspiracy and using a megaphone to talk directly to the marchers, including former MP Peter Garrett. This was a "protest of a protest" getting the word out about the 'cow in the room' to a concerned audience. "Overall the feeling was that the vegan message did get out". The Envirovegans group had a very successful table which ran out of "Eating Up The World" booklets before the end of the march. Many people were very open to receiving vegan information.

About 100 vegan activists participated in the Brisbane march with a strong vegan message. In Adelaide, a large group attended to draw attention to the impact that animal agriculture is having on climate change. And in Coffs Harbour people held up banners saying "50% emissions from animal agriculture".

Supporters of Vegetarian Tasmania and Animals Tasmania and others attended the Hobart march, drawing attention to the links between animal agriculture and climate. "The response from attendees was fabulous."

About 30 vegans marched in Perth, along with Animal Rights Advocates and Allied Against Injustice, to promote veganism. "We had a great response to our vegan outreach." said Nick Pendergrast from ARA. Hundreds of flyers, especially made for the march, were handed out, as well as many vegan starter packs. This was the first time there was a whole vegan contingent in a Perth climate change rally.

Unfortunately some march organisers objected to the extent of the animal agriculture message on the day. In Melbourne they were approached about the possibility of having a speaker, but they declined. The impact of animal agriculture on global warming was not mentioned on the organisers' event page or in speeches on the day. For the sake of the Earth and the animals, vegans must continue to give the clear message that the world must go vegan.

Below are a few photos representing the strength of vegan message all across Australia. 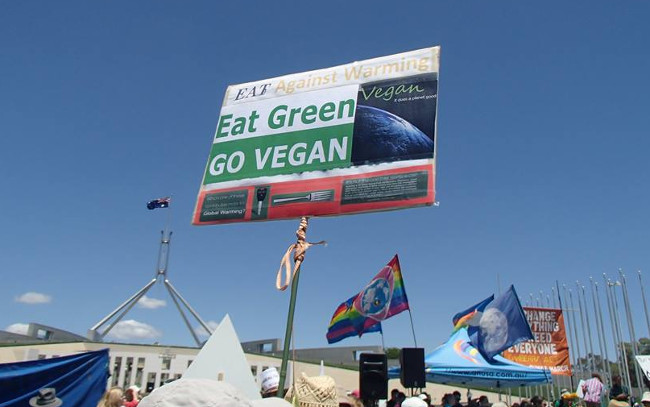 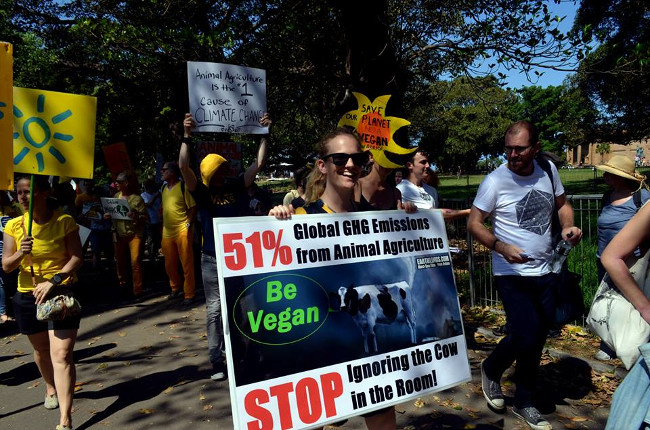 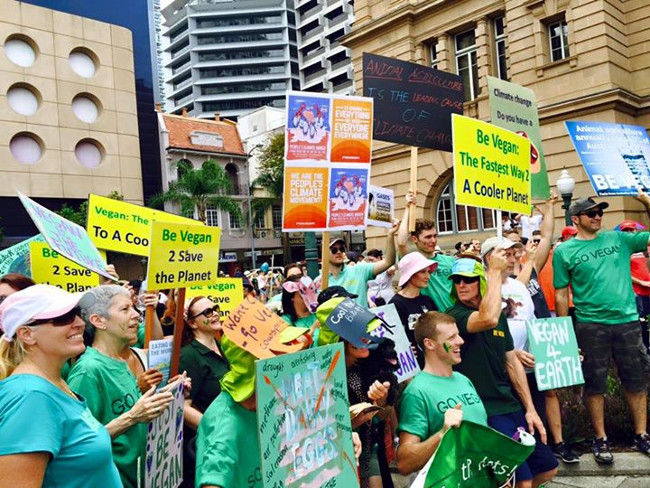 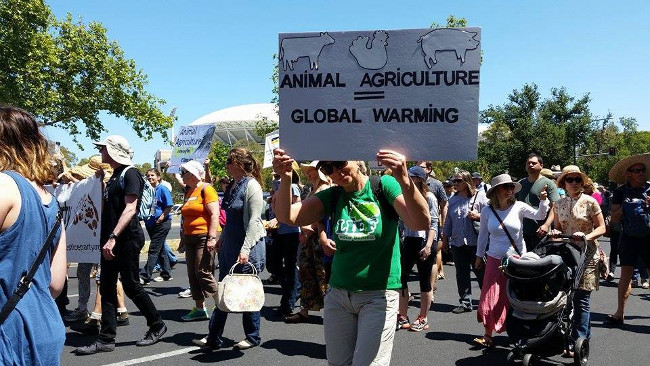 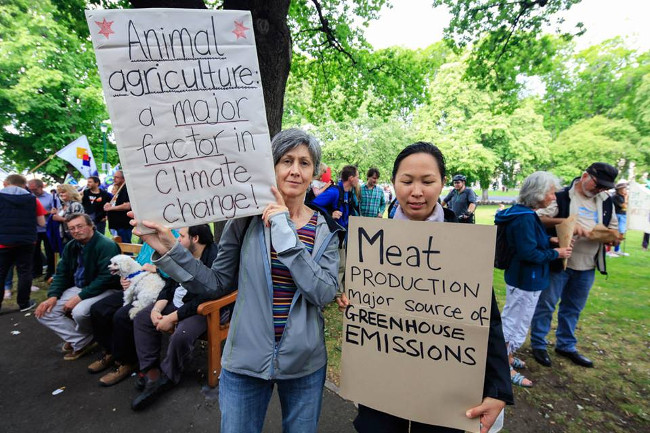 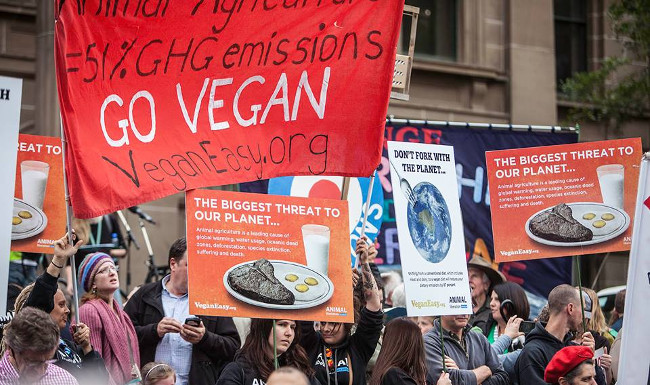 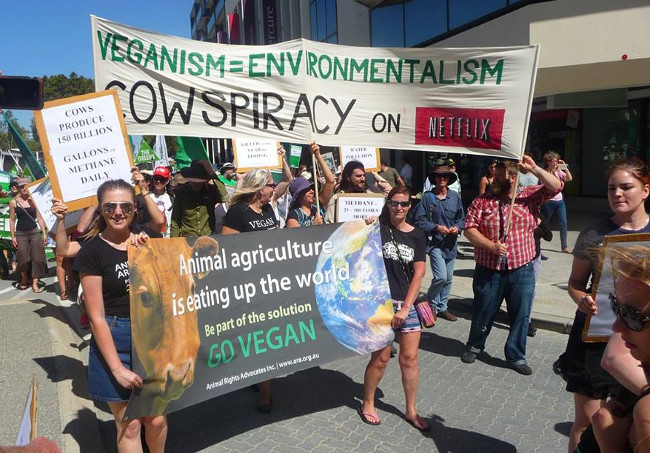