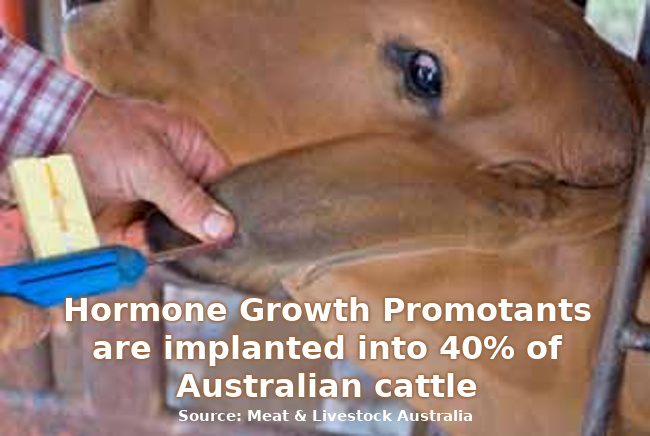 By Shannon Merika, author of a new book on the impact of cattle on Australia rivers, "All our beautiful rivers: material and spiritual aspects of eating cows".

Natural, normal cows are pretty useless to the modern meat and dairy industry. They don't grow fast enough. They're too slow at converting feed into flesh and they only produce one calf at a time (the slackers). That's just not good enough!

For the sake of productive efficiency something had to be done, and it was chemists in white lab coats who came to the rescue. In Australia since 1979 the miracle of modern chemistry has been able to use male and female sex hormones to modify cows to suit the needs of producers to make more money faster.

Hormones are a big deal in any living being because, in even very tiny amounts, they affect most bodily functions. They're powerful stuff to play with.

Hormonal growth promotants (HGPs) are steroidal sex hormones or their synthetic analogues. The ones used in feedlots speed up the rate at which feed is converted to saleable flesh. In the language of the industry, they improve feed conversion efficiency. Some of these god-like chemicals include:

HGPs are used on cows that will be turned into meat - not on cows that are used for breeding. In breeders they can mess up the ovaries and udders.

To get those lazy cows to have more calves faster the industry uses artificial insemination and the following potent hormones:

Artificial insemination gets cows to make more babies faster. Defrosted semen is injected into the cow with a very macho insemination gun. Being injected with follicle stimulating hormone makes the cow produce not just one miserable little egg, but a glorious thirty or so eggs. When those fertilised eggs grow into tiny embryos those embryos are flushed out of the … um, mother? cow and inserted into other cows. Most of the embryos will die, but at least five or so will make it. Ah, life on the land with nature all around. Isn't it grand!

Unfortunately vaginal and rectal prolapses have been reported as an implant side effect.

If the grazier doesn't need any calves from some cows and just wants to turn them into meat, then those cow can have their ovaries cut out to make sure no illegitimate offspring sully the good name of the farmer.

The European Union refuses to accept Australian beef, beef products or dairy products treated with hormones. They upheld the findings of scientists that, in meat/dairy for human consumption, NO acceptable daily intake could be established for oestradiol 17ß, testosterone, progesterone, zeranol or trenbolone acetate and that oestradiol 17ß was a complete carcinogen that both started tumours and helped them grow bigger. Zeranol and trenbolone acetate were also suspected of being carcinogenic.

But our good ol' Australian government and the Australian meat industry claim the meat from hormone treated cattle is safe to eat. Though they accept that the steak, sausage, milk and yoghurt you eat does contain residues of these hormones and that oestradiol 17ß (oestradiol benzoate) is 'potentially' cancer forming, it's nothing to worry about. It's all natural, and besides the amounts are real small. Most important, the improved efficiency of Australia's modified cows adds lots more money to producers.