"Certified Humane" label should be rejected 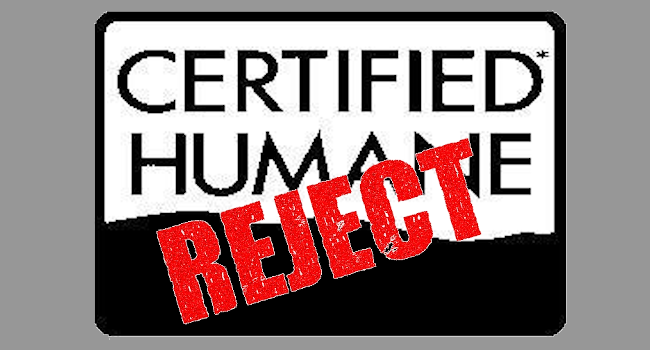 An animal agriculture group has applied for a "Certified Humane" trade mark. Vegan Australia has made a submission to the the ACCC objecting to the application on the basis that the trade mark could mislead consumers.

UPDATE: The application to use the "Certified Humane" trade mark was rejected by the ACCC, stating that the standards underpinning the trade mark are "likely to be inconsistent with reasonable Australian consumers' expectations of humane food production."

Vegan Australia is pleased to have the opportunity to provide a submission to the consultation by the Australian Competition and Consumer Commission (ACCC) regarding the application by Humane Farm Animal Care to register a "Certified Humane" certification trade mark (CTM 1914662) in respect of farmed animals. We hope this submission assists in ensuring the best outcomes for both animals and consumers.

Vegan Australia objects to Humane Farm Animal Care's application on the basis that the trade mark could mislead consumers. The proposed standards are not consistent with Australian consumers' expectations regarding the 'humane' breeding, raising and killing of farmed animals. Nor are the standards compatible with dictionary definitions of the word 'humane'.

Regarding animals, these definitions of 'humane' include such concepts as: showing 'tenderness', 'compassion', 'kindness' and 'sympathy', "showing concern for the pain or suffering of another" and "making sure that they do not suffer more than is necessary".

Our objection to the application can be summarised in the following argument:

As shown by the recent documentary Dominion, the suffering inherent in the animal agriculture industry is hidden from the general public, and so most people have a misguided, and usually optimistic, view of how farmed animals are treated. In addition, because of advertising by the animal products industry and a lack of education, many people do not understand the nutrition requirements of humans and so assume they 'must' eat meat, dairy and eggs to be healthy. If a 'humane' label is permitted on animal products, it would further mislead consumers into thinking it is possible to obtain animal products without suffering. We refer you to our previous in-depth submission which covers a similar application in 2016 for a Free Range Egg Labelling Information Standard (see References).

For evidence that the consumption of animals or their parts is not necessary for human well being, please see Appendix 2.

In addition to the suffering of farmed animals, the animal agriculture industry also causes massive environmental damage, directly causing suffering to native animals, and indirectly causing suffering to people and animals around the world by being a major contributor to the climate crisis and other environmental issues, such as land degradation, air and water pollution, introduction of invasive pasture grasses, loss of biodiversity, and destruction of the Great Barrier Reef. The public is becoming much more aware of these links now, with the UN stating that a shift toward plant-based diets is one of the most significant ways to reduce greenhouse gases from the agriculture sector. The fact that all animal agriculture contributes to this damage means that none of it can be considered 'humane'. See Appendix 3 for more information on the link between animal agriculture and environmental damage.

The consumption of animal products, whether 'humane' or not, causes many adverse health impacts to consumers. Oxford University researchers have estimated that if the global population were to adopt a vegetarian or vegan diet, more than 7 million lives would be saved per year due to reductions in the rate of chronic diseases such as coronary heart disease, stroke, cancer, and type 2 diabetes.

Vegan Australia proposes a phase out of animal agriculture in Australia over 10 years because we acknowledge the reality that there is no possibility of an ethical choice when it comes to using animals as production units. Public support of the animal agriculture industry is built on campaigns of miseducation, and information suppression, often supported by governments.

We propose that education campaigns be implemented to build public awareness of the inevitable suffering caused by the animal agriculture industry. These should be accompanied by campaigns to educate the public that there is no need to consume animal products and that consuming a plant based diet is simple, tasty and healthy.

The presence of the proposed certification trade mark on animal products may cause consumers to wrongly believe that the animal whose body parts or secretions they considering purchasing was treated 'humanely'. As we have shown above, the certification rules do not guarantee that these animals have been humanely bred, raised and killed. This would lead to consumers being misled and and so we ask that the application be rejected.

The proposed standards cover many different animal species and animal products but offer only limited protection to animals. What the proposed standards have in common is that they permit some forms of pain and suffering to farmed animals and they permit the killing of all animals in the production process. No amendments could be made to the standards to avoid all suffering and killing and still allow for the commercial production of animal products.

We note that the proposed standards mostly relate to intensive and housed arrangements for farmed animals. These production systems intrinsically cause suffering to animals by being far from their natural environment.

Below we list some examples. This is not an extensive analysis of the proposed standards. When reading these we ask you to replace in your mind the farmed animals referenced with animals such as dogs or cats. Would any of these then be considered 'humane' practices?

Animal science shows us that farmed animals feel the same level of pain as companion animal species. Again, we ask you if you would permit any of these procedures to be performed on your cat or dog?

There are many other permitted practices we could list that would not be seen as 'humane' by the average consumer. Having 'Certified Humane' labels on products produced under these standards would mislead consumers.

Appendix 2 Evidence that animal products are not necessary for health

Vegan Australia's recommendation to phase out animal agriculture implies a change to a plant-based diet for the people of Australia. Nutritional science shows that humans have no need for farmed animal food products. In fact, there is a solid body of peer-reviewed scientific evidence to confirm that it actually benefits human health to consume a primarily plant-based diet. Changing to a plant-based diet can help people live a longer, healthier life, and significantly reduce risk of falling victim to many of the serious health threats facing Australians today.

Australia's peak health body, the National Health and Medical Research Council, recognises that a vegan diet is a viable option for all Australians. Australia's top health experts agree with those in other parts of the world that well-planned vegan diets are safe and healthy for all age groups. The Australian Dietary Guidelines state that alternatives to animal foods, such as nuts, seeds, legumes, beans and tofu, can "increase dietary variety and provide a valuable and affordable source of protein and other nutrients found in meats."

According to the US Academy of Nutrition and Dietetics, "Appropriately planned ... vegan diets are healthful, nutritionally adequate, and may provide health benefits for the prevention and treatment of certain diseases. These diets are appropriate for all stages of the life cycle, including pregnancy, lactation, infancy, childhood, adolescence, older adulthood and for athletes."

Not only are animal products unnecessary for optimal health, an increasing number of nutritionists and health professionals are acknowledging animal products are harmful to our health. This is supported by decades of good research. A healthy vegan diet helps reduce the risk of heart disease, stroke, cancer, obesity, and diabetes, some of Australia's top killers. The World Health Organisation has stated that processed meats such as bacon cause cancer and the red meat is a probable cause of cancer.

A recent issue of the Medical Journal of Australia, dedicated to the question "Is a Vegetarian [including vegan] Diet Adequate?", included the following statements. "A varied and balanced plant-based diet can provide all of the nutrients needed for good health." "Most vegans meet the recommended daily intake for protein." "Vegan diets generally contain just as much or more iron than mixed diets containing meat." "BMI and obesity was lowest for vegans."

The China Study by T Colin Campbell is one of the most comprehensive studies on nutrition ever done. Campbell provides compelling evidence linking animal products to disease, including cancer, heart disease, osteoporosis, diabetes, etc.

Every current vegan, by simply being vegan, proves that causing harm to sentient farmed animals is not necessary.

Appendix 3 Impact of animal agriculture on the environment

We also refer you to a previous submission to an inquiry into Australia's faunal extinction crisis which looks at how animal agriculture is damaging native animal species through land clearing. (see References).