Best thing I have ever done 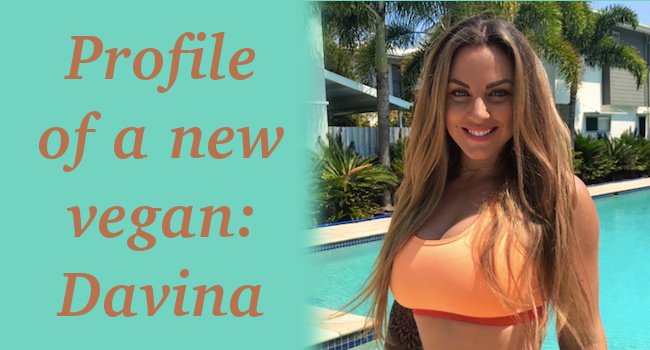 Profile of a new vegan: Davina Maree met a vegan at the gym who changed her life. Here is her vegan story.

Davina grew up in a family bakery and, from childhood, animal products were in most food that you'd find at a typical bakery. At 31, Davina decided to compete in a fitness competition. Through the competition preparation, Davina's diet consisted of high protein, low carb, low fat. Around that time, Davina met a beautiful girl, Sarah at the gym. They clicked instantly and quickly became good friends. They started training together at 4am, 6 days every week. Sarah was vegan and came from a massive carnivore culture. It was impressive to hear that a huge meat eater had totally ditched all animal products. At this stage, Davina was keen to try, but didn't want to jeopardise her competition preparation, so Davina made a commitment to go vegan once she had completed this journey to the stage.

Davina's body sculpting journey took her from her hometown of Melbourne to placing top 10 in Las Vegas to represent Australia at the INBA World Titles 'Natural Olympia'. Once Davina returned to Australia, she went vegan overnight. The benefits were apparent within only two weeks! Lighter feeling, more energy, faster muscle recovery and more compassionate toward humans and animals. Davina loved this lifestyle so much that she studied and became a vegan nutritionist. Initially transitioning for her health and fitness, she later realised the benefits to the environment and could never eat an animal again.

"The best thing I have ever done for my health was to go vegan. Now I love educating others who decide to move to the vegan lifestyle." Davina Maree