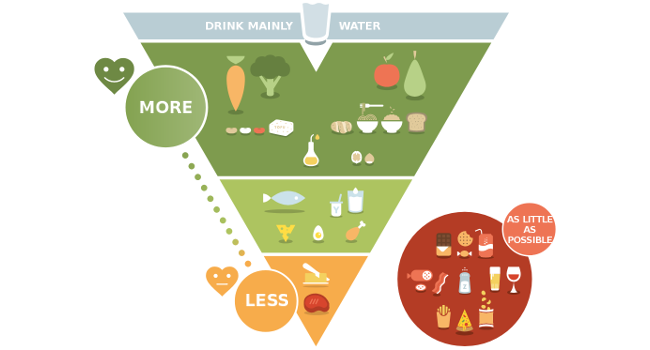 The new "food triangle" has turned the familiar food pyramid upside down, emphasising the value of unprocessed plant foods and sustainable diet choices.

Plant foods should form the basis of our meals, according to the Institute. It also recommends alternatives to meat such as soy-based products and legumes.

Processed meats, such as bacon, ham and salami, have been relegated to the "red zone", outside the healthy nutrition triangle. The red zone also includes sugary drinks and junk foods high in sugar, oil and salt. While the guidelines indicate these foods should be eaten "as little as possible", the Institute also says "We want to make it clear that we don't need these products" and "they are superfluous in a healthy diet."

In 2015, the World Health Organisation declared that processed meat is "carcinogenic to humans" and "eating processed meat causes colorectal (bowel) cancer". It may also cause cancers of the oesophagus, lung, stomach and prostate.

Since then, the global meat industry has been lobbying governments to protect their profits. In the US, they successfully stopped the government from advising people to eat less meat. But the meat industry has not been as successful in other countries, such as Belgium. Canada is also beginning to remove animal products from their guidelines, with a proposal to remove dairy as a food group.

In Australia, the official 2012 dietary guidelines place processed meats in the same category as sugar- and salt-laden pastries and snacks and recommend people "limit intake" of these foods. They also refer to a study showing a "convincing relationship between red and processed meat and increased risk of colorectal cancer."