An undeniable part of the solution is veganism 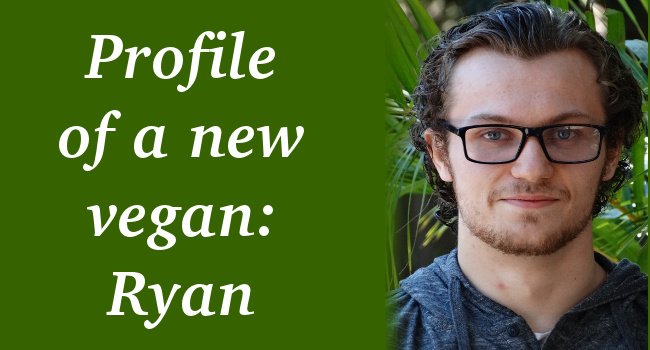 Profile of a new vegan: Ryan Massey is an athlete and a thinker who questions everything. Here is his vegan story.

I have never given much thought on how I became a vegan, what led up to the making of such a life altering decision. I like to think of myself as a deep thinker, open minded and one to always try and snuff out any logical inconsistencies I carry. But after some introspection, I have come up with the main reasons (not all of them) that I have changed my lifestyle.

I am an athlete, I train and compete in Brazilian Jiu Jitsu (an art of grappling) and before that, I played rugby league. I have friends who are vegan and through them and some research on the web I had heard that being on a plant based diet speeds up recovery time. I needed to clean up my diet before a competition I had coming up. And with much consideration, and with the encouragement given to me by watching other vegan athletes, Rich Roll, Nate Diaz, and Patrick Baboumian among them, I decided to stop eating all animal products for one month before I competed. So I did. When my competition rolled around I felt great. I did not feel heavy, I did not fatigue and even before two weeks out from the competition I found that my recovery after training had skyrocketed. I have not looked back since.

Not just a diet

I am aware that veganism is not just a diet by any stretch of the imagination, it is something more akin to a philosophy, or as some would say, a natural state of being. You would have to live in a trench many fathoms deep not to know that this world is, and has been for now a couple hundred years, heading in a dark direction. And some of the drivers in that change of direction are climate change, world hunger, habitat destruction, and the collective suffering of uncountable humans and non-human animals. I have always considered myself a free thinker, or how Noam Chomsky put it: 'I was never aware of any other option but to question everything.' After many hours spent researching and reading, I discovered a connection between all of these global problems, that connection is animal agriculture and exploitation.

Why I am writing this

The aforementioned problems connect us, globally. They go above our beliefs, above our creeds and our countries, our armies and our families. That is not to say that there aren't people who deny the problems or think themselves exempt from having to deal with them. I don't want it to be the problems that we are facing to connect humanity, I want it to be the solution that brings us together, I want to lend my hand to that solution. And an undeniable part of the solution is veganism. Too long have I been on the wrong side of history, and I am starting here to redeem that.