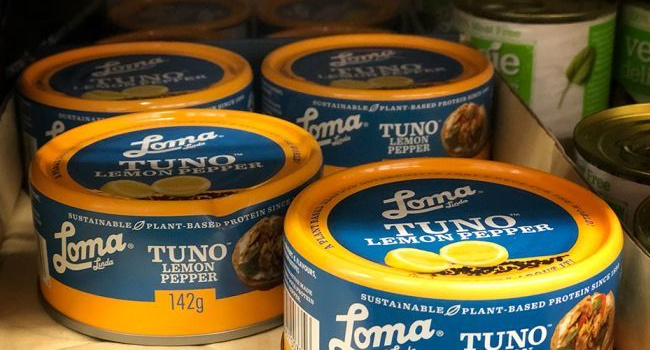 In an item Vegans call for 'suffering' label as seafood industry slams 'fishless tuna' about a new vegan product, 'Tuno', the ABC has reported on Vegan Australia's call for honesty in labelling animal products. They point out "Vegan Australia says it goes both ways, and that the degree of animal suffering should be made clear on all food labelling"

While the packaging clearly states it's a "plant-based protein", the tuna industry is claiming that the product label "verges on being false and misleading."

What is really "false and misleading" is the spin the animal industries put on the whole process of breeding, raising and killing over half a billion land animals (and many more sea animals) in Australia every year for food. Walk into a supermarket and you'll see pleasant pictures of cows in meadows, chickens in fields and free swimming fish. Where are the images of the forced impregnations, the calves taken away soon after birth, day-old chicks being ground up alive and the tonnes of fish and other sea animals swept up in massive trawler nets?

Under a heading Vegan calls for 'suffering' label the article goes on:

"I think honesty in labelling is a good idea but it should go both ways," he said.

"Consumers should be aware of what the product is that they're buying, and how much suffering went into it.

"On a milk label, for example, it should include the fact that the cows are impregnated, their babies taken away, and that that cycle goes on for a few years, and then the animal is killed."

"For most vegans the idea is that we try to avoid causing suffering to animals, it doesn't really have anything to do with taste," he said.

"If something tastes nice then it tastes nice, and if you can get the same thing without the suffering then do that."

Here are other articles about the call by Vegan Australia for honesty in labelling: