A long journey to veganism 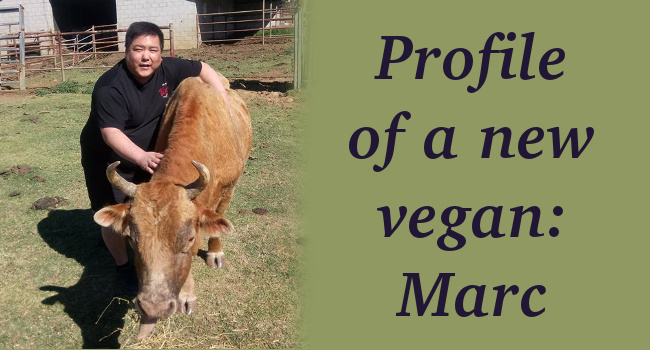 Profile of a new vegan: Marc Ten Low has taken the long road to veganism. Read his vegan story here.

My story of becoming vegan is quite an interesting one and encompasses some 25 years to date. It has been a journey, one that will annoy people who have been well-educated by the vegan movement, but remember that this was as long as 25 years ago, when vegan education, especially through social media, was not what it is today.

In 1995 (when I was 15 or 16) I watched the movie Free Willy, and although I remember only a few parts of it, I asked the very ridiculous question in my English class: "I watched Free Willy, and the main character calls the whale 'boy'!" There were a few sniffly responses around the class, and then I said: "You're supposed to think about it." And my English teacher said: "Yeah, I'll think about it, over a couple of beers..." and proceeded to talk about how his favourite food was a kind of meat.

In 1996 I was partaking in a school barbeque when I realised that I was eating red meat and how disgusting that made me felt. I thought about it and wrote in my diary that "I should shower less," and about my feelings about the barbeque. I was not educated on environmental impact of eating animal products, so I proceeded to do some research by reading books from my local library on healthy diets and a book on being vegetarian by The Vegetarian Society UK.

The books on diets recommended things like eating yoghurt and one egg a day (despite the cholesterol). The vegetarian book mentioned a lot of useful facts but, being a product of vegetarians, did not go into detail about the horrors of chicken factory farms and the dairy industry.

It was rather fortunate that there was a "health food" company in Australia called Sanitarium which I liked, so over the next 20 years I bought lots of soymilk from them and drank very little cows milk, although I still had small amounts of cheese.

In 2017 the vegan movement really started spreading and I tearfully watched hours and hours of slaughterhouse footage, and animal rights activism, on YouTube, and I still do. This really opened my mind and I required of myself to become vegan, which I still am.

It pays to take note of a number of inhibitions to me becoming vegan. Firstly, before 2017 I was led to believe that a vegan was someone who avoided all animals products due to health reasons (because they were for some allergic reasons unable to eat eggs and milk). I also believed that being vegan was "unsustainable" and that most vegans were frail and deformed (the "cows milk makes you strong" conspiracy). Finally, I was also conceited enough to acknowledge that I was doing "more than almost everybody else" for the cause of animals and the environment, hence I was not motivated to raise the standard to becoming fully vegan.

It takes a lot of exposure to the right influences to become a dedicated vegan. My situation is made worse by the fact that my parents have had, and continue to have, many similar indoctrinations about veganism which are difficult to dispel. For example, my mother still believes that human values take precedence over animal rights, and she does not respond when I ask her whether she is still eating the harmful foods of fish and eggs. My father is a doctor and he also harbours many irrational beliefs about why veganism is what it is.

Over the last few years that I have been active in Facebook groups, I have contributed abundantly and variously in support of veganism, and engaged in many excruciating debates. I am something of a keyboard warrior and have turned at least a few people vegan, as well as encouraging and supporting those who already know better. Some of the famous and semi-famous activists and vegans that I've interacted with include Tyra Eberwein (now branded as 'tyrabundance'), That Vegan Couple (I am one of the few who regularly comment on their podcasts), Tash Peterson, Chase Avoir and Ryuji Chua (branded as Peace By Vegan). They are all beautiful, beautiful people and care about the future. I care about them.

However, my oratorical skills are not quite as good and for that reason I am not a member of Anonymous for the Voiceless, even though I would very much like to be. My experiences with others in that group have been lukewarm but I continue to support their cause and their ideals. Not all vegans are completely friendly; we are all humans, who are liable to argue and bicker and squabble. But I sincerely hope that we overcome our differences to further our uniting cause: to save the animals from suffering.