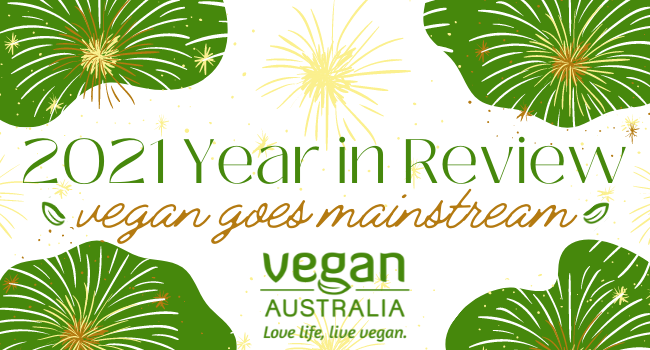 Now that World Vegan Month has passed, Vegan Australia would like to congratulate the thousands of people, partners, mentors and ambassadors who joined the special November Vegan Easy Challenge! It's our first year as Challenge co-hosts and we're thrilled that participants' feedback showed they had a great experience trying a cruelty-free lifestyle for 30 days. Hearteningly, the majority of Challengers said they will continue to embrace kindness to all beings on an ongoing basis. Curious? The Challenge is free and you can start anytime. Learn more on this great episode of the Vegan Diaries Podcast.

Listen to a snapshot of the interview here.

Despite the tumultuous period in history that was 2021, we remain hopeful due to the ongoing strong growth in veganism throughout Australia and our region. With Australian meat consumption down by 5.5% in the last two years (ABARES), it now stands at the lowest level in 15 years (IBIS World). There is definitely cause for optimism as ever more individuals make the connection between all the reasons to go vegan. 11% of Aussies are now considering adopting a fully vegan diet in the next five years (CHOICE). Plus, 2021 was declared the International Year of Fruits and Vegetables by the UN - so we've had some heavy hitting support behind us from the start! ;)

Some of the achievements our tiny but mighty volunteer team has engaged on this year:

There's still time to throw together some cruelty-free holiday celebrations! Here are some resources to help:

The team at Vegan Australia will be taking a digital break over the festive season. Now that some parts of Australia are cautiously beginning to open back up to travel and social gatherings, you'll find us (COVID-safely) sampling some of the vegan events that have re-launched themselves across the country. As well as supporting our favourite cafes, shops, sanctuaries and the great outdoors that have been so sorely missed these past 18 months. You can search and discover what vegan events are happening in your area via our partnership with VegEvents.

We have a 60-day complementary subscription to Films For Change for all Vegan Australia supporters. This ad-free platform includes a growing list of vegan films including The Invisible Vegan, PowerPlant and The End of Meat.

Vegan Australia is funded by our supporters and donations from the public. With your generous contribution, you can become a vital part of our registered charity's efforts to promote veganism through further research, education, outreach and campaigns. Thank you for making the world a better place for all beings.

The incredible growth in the vegan movement in 2021 has been due to tens of thousands of concerned Australians alongside our global plant-powered community. We'd like to thank everyone who has been part of helping build the momentum into the mainstream this year.

Let us continue in 2022 until every animal is free.

Make 2022 your kindest year yet by trying the free Vegan Easy Challenge or recommending it to a plant-curious person in your life by scrolling down to our 'Invite a Friend' section.

We've got big plans to shake up the systems that underpin the animal agriculture industrial complex. Stay tuned for the new year when we'll announce our exciting Federal Election campaign!

Wishing you safe, kind and happy holidays,
from Vegan Australia